Press Release: Beyond Religion by His Holiness the Dalai Lama

“This wise, humane book…is an incisive statement of His Holiness’s thinking on ways to bring peace to a suffering world.”

Ethics for a Whole World

by His Holiness the

With BEYOND RELIGION, the Dalai Lama delivers his most compassionate and outspoken vision for the nonreligious way.  The lessons he 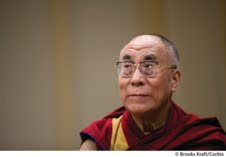 offers in the book transcend the “religion wars,” as the Dalai Lama outlines a system of ethical belief that gives tolerant respect to religion while teaching the importance of inner values.  As he steps down as political leader of Tibet to focus entirely on his spiritual leadership, the Dalai Lama commits to a “third way,” one he believes is the best way to build a more compassionate and peaceful world.

BEYOND RELIGION comes ten years after his bestselling Ethics for a New Millennium, and is the Dalai Lama’s first and only book focused on his secular teachings. 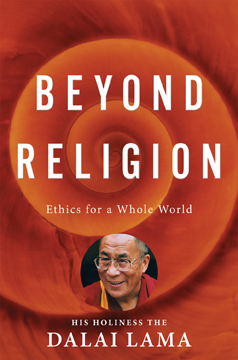 Providing the guidance to improve human life on individual, community, and global levels, including a guided meditation practice for cultivating key human values, BEYOND RELIGION is an essential statement from the Dalai Lama, a blueprint for all those who yearn for a life of spiritual fulfillment as they work for a better world.

TENZIN GYATSO, His Holiness the Fourteenth Dalai Lama, has been the spiritual and temporal leader of the Tibetan people for more than sixty years. His tireless efforts on behalf of human rights and world peace have brought him international recognition. He is the recipient of the Wallenberg Award (conferred by the U.S. Congressional Human Rights Foundation), the Albert Schweitzer Award, the Congressional Gold Medal, and the Nobel Peace Prize.