Welcome, Adrian, please tell us a bit about yourself. Where you’re from, where you live? Do you have one of those day-jobs?

My name is Adrian P. Stubbs; I was born in Nassau, Bahamas. Both of my parents were employed in the public service. My mother was a career nurse and my father was a career police officer. I received my first under graduate degree from Norfolk State University in Norfolk, Virginia. Later, I earned both a Bachelor of Science and Master of Science degree from Kennedy-Western University.

I am an electronics engineer, currently employed in the Information Technology (IT) field. I also have approximately 22 years of experience working in a part-time capacity as a certified law enforcement officer in both uniform and plain-clothes divisions.  After graduating from Norfolk State University, I served a short stint as a marine. I reside in Metro-Atlanta, Georgia with my family.

I see you are a forensic-cyber crime investigator. I find that fascinating, but many readers may not understand exactly what you do. Can you give readers a little insight?

Basically, that means that I used high technology to investigate crimes that involved the use of computers and portable electronic devices. That would entail the thorough investigation of electronic communications devices – e-mail messages, electronic documents and attachments, phone calls, text messages, images and Internet traffic. Criminals may use technology to carry out a vast number of crimes including: Terrorism, identity theft, fraud, sex-crimes against children, harassments/threats, conspiracies, murder/violent crimes, thefts, kidnapping, drug trafficking, cyber-stalking, and hacking, to name a few.  The electronic communications devices used may include: computers, cellphones, PDAs, I-Pads, etc.  This type of investigative work is similar to what many of your readers may have seen on the television programs CSI and NCIS.

Please tell us about your latest release?

“Keepers of the Gate: Defenders of the Free World” is a fictional account of the formation of a multi-national counter-terrorist special operations command that is based in Virginia Beach, Virginia. This group of SOG (special operations group) commandos tackles traditional terrorism as well as threats from beyond the skies that lead up to events prophesied to transpire in December 2012.

The idea to write this fictional account of a military counter-terrorist organization was first conceived during the late 1980s. At that time, the scourge of terrorism was spreading over the world like a plaque, more than it had at any time in the 20th century. Whenever the United States or our allies were threatened or attacked, commandos from the US special operations group (SOG), were called into action and served gallantly both overtly and covertly against terrorist targets around the globe. 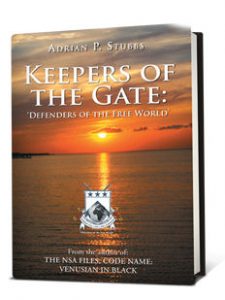 At the point that the idea for the novel was conceived, I thought that it would be a great idea to create a multi-national counter-terrorist organization that could respond to terrorist related activities around the globe, without it having the label of being “American or US forces”.  I then asked myself, “Why should America solely carry the burden for making the world a safer place for everyone to live in?”  “Why not spread that responsibility over a wider group that had common goals/interests?”  My answer to my self-imposed question was the creation of the special operations group which is depicted within my book.

Though fictional in nature, this book creatively ties military technology and operations, to general/current and future events, with apocalyptic twists to some of them. This book also encompasses events predicted in the Mayan calendar to occur on December 21, 2012, with the return of a rogue planet to this galaxy, called Nibiru.

Well, unless the readers had read my first publication, “The NSA Files, Code Name: Venusian in Black”, he/she would not realize that the current book is a part of a series. Keepers of the Gate is divided in three separate parts, each depicting different eras in the life of this new special operations command.  In the current release, parts 1 and 2 pre-date the era depicted in “The NSA Files”, while part 3 picks up from where “The NSA Files” left off.

The book is about counter-terrorism and a special group that is formed to fight it. You’re background is in law enforcement. How does that factor into your book? Are there real-life incidents (don’t have to give any secrets! LOL) that appear in your book?

That’s true, but I do have a military background. Also, my investigative work in cyber-crime and general law enforcement, in addition with my being an IT professional, enable me to have an educated perspective on the subject. While writing this book, I used many aspects of my experiences, training, formal and informal education to create realistic, but fictional events. While the events and incidents depicted in my books are fictional, the technologies, equipment, and basic operational tactics deployed are based on reality. I won’t go into any more details at this point, other than to say, “Please read my books to understand what I’m referring to.”

I really didn’t have any difficulty in creating the various characters in my books. It was as though I was being inspired to create them.  It was easy to create the personalities for each character; it was hardest coming up with names to match the character descriptions and personalities that I had formulated in my mind.

That definitely would be General Anwar Roche, the main character. He is my alter ego, thus he was created using much of my personality traits and characteristics.

It definitely would be Zecharia Sitchin.  I would like to sit and talk with him to learn more from his vast knowledge of ancient human cultures, in particular, the Sumerians and early Egyptians.

Surprised, well I’m not sure that they would be since they don’t know me personally.  I am an avid amateur photographer, poet and artist.  I have a natural skill for drawing life-like dictions of scenes that I’m trying to capture on paper. As a poet, I have produced a manuscript with over 150 poems which I may one day publish.  To date, I have written over 200 poems.

Is there another book in this series, in the works?

Right now, I’m not sure.  Many of my readers have told me what they’d like to see in the continuation of the story line. But at this stage, I remain unsure.  There’s a possibility that I may decide to begin working on it in the near future.

Thank you very much for stopping by Reader’s Entertainment, Adrian. We look forward to reading this title, and can’t wait for future books.

For more information on Adrian or any of his books, please follow the links below.