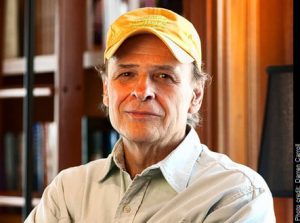 One of the awards given annually as part of the Dayton Literary Peace Prize awards is the Richard C. Holbrooke Distinguished Achievement Award. This award is given in honor of U.S. Ambassador Richard Holbrooke who was a recipient of the original Dayton Peace Prize. It was created as a tribute the late Ambassador who urged leaders worldwide to forge peace with words, and is given for a body of literary work.

This year the award was given to author Tim O’Brien. A Vietnam veteran, Mr. O’Brien has penned a number of distinguished novels, In the Lake of the Woods, The Things they Carried, and July, July.

Details from their press release:
The Richard C. Holbrooke Distinguished Achievement Award being given to Tim O’Brien by the Dayton Literary Peace Prize Foundation can in some ways be traced to a resolution of the United States Congress.

In 1964 Congress passed the Gulf of Tonkin Resolution and ignited the Vietnam War, a war which quickly divided the country and sadly took the lives of more than 58,000 Americans. In 1968 Tim O’Brien’s promising graduate education at Harvard was interrupted by a draft notice just two weeks after his graduation from Macalester College. Clearly one of America’s best and brightest, O’Brien was soon in Vietnam, serving as a grunt soldier assigned to the Americal Division where his platoon conducted search and destroy missions in some of the same “Pinkville” villages in the Quang Ngai Province that less than a year before had been subjected to the search and destroy missions by Lt. William Calley that had resulted in the My Lai Massacre.

O’Brien’s experiences in Vietnam became the war stories of a series of novels and a memoir, but his works go far beyond combat life. He has used his war stories to join the past to the future as he weaves them into the fabric of his characters and tells the reader how war experiences affect the ability to love and find peace in a post-war environment. As he said in The Things They Carried, “a true war story is never about war. It’s about sunlight … It’s about love and memory. It’s about sorrow.”

He first captured his Vietnam experiences in his memoir If I die in a Combat Zone, Box Me Up and Ship Me Home, a title taken from a military marching cadence. A subsequent novel, Going After Cacciato, has been described as “the finest piece of American fiction to emerge from the Vietnam War,” a recognition repeated again and again by the critics. Recounting the search and destroy missions of soldiers in Vietnam, Tim O’Brien captures the horrors and hallucinations of war as he searches for peace and tries to comprehend how war affects the land and people caught up in it. As Paul Berlin the protagonist scans the deceptive plains of Quang Ngai Province, he wistfully wonders “Where have the birds gone?”

O’Brien also explores the lingering passions and pain that lie half-buried in the aftermath of war. He engages the reader in the plot of In the Lake of the Wood, a novel that uses the actual transcript of the Lt. Calley court-martial. The protagonist John Wade suffers a humiliating political defeat triggered by the last minute publication of his participation in the My Lai Massacre. Wade and his wife retreat to a remote cabin where he struggles through a labyrinth of unearthed feelings. The confusion and ambiguities of Wade’s struggles become part of the readers’ experience as Wade’s wife, and then Wade, disappear, and the readers are left to make their own conclusions.

In addition to the insightful writings drawn from his Vietnam experiences, O’Brien has successfully ventured into humor. Tomcat in Love, a collection of stories, provides a wonderful character description that might apply to O’Brien himself:

In one way or another, it seems to me, virtually every human utterance represents a performance of sorts, and I, too, have been known to lay on the flourishes. I enjoy the decorative adjective, the animating adverb. I use words, as a fireman uses water.

O’Brien’s work demonstrates enormous talent in the use of the subtleties and texture of the English language. Now we honor his use of his own talents and experiences to deepen our understanding of the realities of war and their effect on the individual struggle for peace.

In the Lake of the Woods was described by Timemagazine as the best novel of 1994. The book also received the James Fenimore Cooper Prize from the American Society of Historians. The Things They Carried received France’s Prix du Meilleur Livre Etranger award. It was also a finalist for the Pulitzer Prize and a finalist for the National Book Critics Circle Award. His book, Going After Cacciato, won the National Book Award in fiction in 1979. O’Brien is the recipient of literary awards from the American Academy of Arts and Letters, the Guggenheim Foundation, and the National Endowment for the Arts.

With the Ambassador Richard C. Holbrooke Distinguished Achievement Award, the Dayton Literary Peace Prize Foundation honors a body of work that reflects literary excellence and advances our understanding of peace. As O’Brien himself has written in The Things They Carried: “In the midst of evil you want to be a good man. You want decency. You want justice and courtesy and human concord.”

Tim O’Brien’s body of work in the literature of war will forever stand out as a major contribution to the effort to promote peace, harmony, and human understanding through the use of the written word.