BEA Goes to the Dogs…and Cats!

Book Expo America in New York City is a large industry convention that is now open to the public on the final day of the con.  You will find authors, publishers, publicists, tech companies, booksellers, book binders, book shippers, book promoters and dogs.  And cats.

This year there seemed to be a theme going on that was unplanned, but hard to miss.  The number of animal books and giveaways was prominent at the convention each day.  And even though Grumpy Cat made a live appearance to promote his new book, we somehow doubt that this is what inspired so many animal offerings.  Grumpy Cat is inspiring though with over 300 people standing in line for a glimpse of the frowning feline and a copy of the book.  Grumpy Cat appeared to have more fans in line than the next most popular author signing at the event, Jim Carrey.  The comedian, who has written a children’s book, didn’t seem affected by the popularity of the Grump and we have it on good authority that Mr. Carrey is quite an animal lover himself.  All-in-all I think that if Grumpy Cat could have smiled he would have. 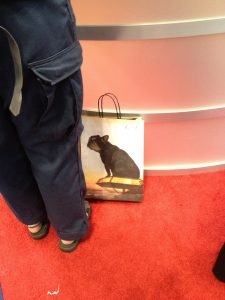 From children’s books to how to books dogs and cats remained the popular topic.  Fiction to non-fiction, felines to canines, people want to know about animals, read about animals stories and get animal toys. If there was a dog theme somewhere, people wanted it.  No matter what kind of dog.

Favorite giveaways included some Mylar balloons, dog Frisbees, doggie poo bags, a book about dog talk, a book about the world’s smartest dog and a very sweet poster of a leopard and a dog.  There were many more animal-themed books and giveaways, but those rated very high with attendees if you believed your own eyes, as those items seemed to be in the hands of most everyone walking the show floor.

There’s something about dogs and cats that make humans happy so there were a lot of smiling people.  It also inspired people to have conversations with other attendees based solely on a shared love of animals.  People bonded, networked and smiled as they walked their balloon dogs down the showroom floor.

Readers Entertainmenthttp://dayagency.com
Previous articleComic Publisher Tells Fan She is Too Old for Them: Editorial by Sheila Clover English
Next articleThe Loner by Lindsay McKenna Book Trailer