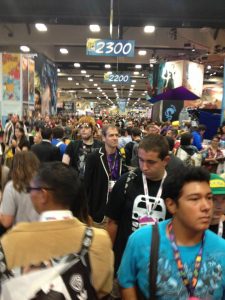 ComicCon The City
by Sheila English

With an estimated 125,000 attendees ComicCon is, for five days, a city unto itself. The main convention hall is the city center, or the capital if you will. The Marriott Marquis would be the suburbs and those buildings that housed special events outside the convention center would be “the outskirts”.

Like any city there’s a dark underbelly, heroes who save the day, good guys, bad guys, events and politics. Each vendor is a vital company within the city. And like any company there are those who are primarily focused on money and those primarily focused on people. There were some amazing stories of heroes who helped fellow citizens and stories of bureaucracy that nearly crippled some of the companies on certain days.

125,000 people converge on the city of San Diego, which itself has a population of over 1.3 million.  But, those 125,000 are all going to the same area in the city, so the nearby bars, restaurants and shops have to gear up for the influx of people.

125,000 is the San Diego Convention Center’s top capacity. Though the center is only the 24th largest convention center in the United States, it is located near enough to L.A. and Hollywood to attract movie and television stars, many of them 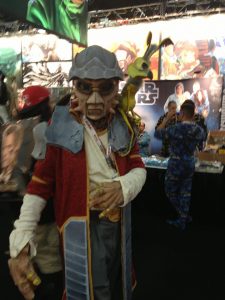 The event started in 1970 with approximately 300 people in attendance and evolved to its now famous name and event, but it has always focused on comics and comic art. Over the years it expanded to include pop culture and other entertainment venues quickly began to become a main staple, such as television and movies. This year even the lead singer of Metallica made an appearance.

In 2007, the convention sold out and in 2008 it sold out weeks in advance. By 2010 the convention was a massive event that needed more oversight than ever before. The 2010 convention had the unfortunate experience of a stabbing during a panel when one attendee became upset over having someone else too close to him.

The much coveted passes were becoming harder to get and fans become more desperate to do anything to have them. There’s ticket scalping that goes on just like you find at music concerts. People walk around with signs asking to buy someone’s pass for the day. And if you manage to get a pass, that doesn’t mean you will get to see the panels you want to see or get the exclusive items you want to get.  You wait in line for hours for the chance at a raffle and regardless of how long you waited, you can still walk away with nothing. 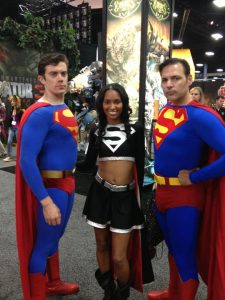 The rules can change from day to day if you’re an exhibitor.  Just because the rules, set in stone, written in blood, pinky-sworn to follow are understood by both parties (Convention leadership and exhibitors) doesn’t mean that you can trust it.

Without warning exhibitors were told they had to wait to bring in their daily giveaways or other items. Then, the final day they were told they couldn’t bring in any carts so all boxes and items would need to be carried in by staff. Not a great situation for the book store in the back of the convention hall.  Exhibitors can wait for up to ten years to get a booth.  They pay a lot of money for the privilege of having a booth there. The wait list to have a booth is very long. So, if you don’t like how you’re treated, someone will take your place. You won’t be missed. Well, unless you’re Marvel, or DC maybe.

Featured guests would be given handlers or liaisons, but getting questions answered in advance was slow or ignored entirely. It seemed more of a staffing problem than anything disrespectful.

Exhibitors were not always kind to each other. This seemed to stem from one or two reasons; there were issues of exhibitors getting in early and taking things without permission and some exhibitors seemed to have policies meant to keep things organized but came across as unfriendly.

Fans, however, were, as a rule, extremely kind and friendly. The overall energy was that of positive excitement and this honest camaraderie. Everyone wanted to see everyone else have a good time. 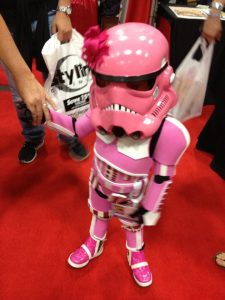 The fans kept the bureaucracy from driving everyone crazy.

The raffle system to get exclusives was frustrating. Standing in line for a chance at an item seems perfectly fair until you start to consider what you might be doing with that one or two hours of time instead of gambling away your time for a single item.

Some people got in line multiple times, got multiple items and sold them off on eBay. The number of entrepreneurs of this type was astounding. And though standing in line is like working and we don’t blame someone for selling what they got, there were true fans who would have loved and treasured that item that walked away with nothing. There’s always eBay if they want to pay ten times what the thing was originally worth.

Some items were available to vendors and special guests, some were not. Sometimes you waited in line for an hour and were not told that you were not eligible until you got to the front of the line.

Better communication during an event as well as before might make for less wasted time for attendees. 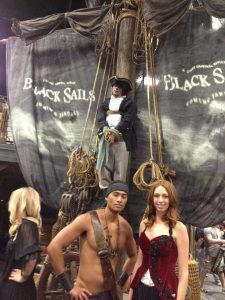 No one expects ComicCon to donate everything. It takes money to run such a huge event. ComicCon does indeed sponsor things like the blood drive and awards. It is a non-profit and it does fulfill its mission statement regarding education.

Anytime there is extreme growth in such a short period of time there will be growing pains. The venue needs to be larger and the convention center has plans to expand. Anaheim’s convention center tried to woo the Con away and is a much large venue. Something, perhaps a sense of history since it started in San Diego, perhaps logistics, perhaps politics, keeps the convention in San Diego. As long as there are more people who want in than what the venue can hold there will be frustration and disappointment.  And it could be that if capacity doubled there would still be people not able to get in. The event grows in popularity each year.

Those people in security seemed to be as frustrated by attendees not following rules or trying to sneak in as attendees were when those people became quite militant in the way they were handling situations.

Many volunteers were off-duty Navy and those people seemed more friendly even in difficult circumstances, perhaps

because of their additional training, or perhaps because when you’re trained for life and death situations angry men in tights don’t make you break a sweat. Either way, kudos to those people who kept a level head and even tried to infuse situations with a positive attitude.

HEROES SAVE THE DAY

Though Captain America, Thor, Superman and Spider-Man could be seen in just about every form you can imagine from art to video and from figures to actors in costume, the real heroes of ComicCon had a whole different set of super powers.

Artists and storytellers were the main reason to come to the event. They are the backbone, the history and the future. Artist row was full of talent and it wasn’t unusual to see a famous artist or writer chatting with fans as though that fan was the most important person there in that moment. The honest appreciation coming from the guests of the convention toward the fans was something to see. Samuel L. Jackson was at the Marvel booth talking to people, enjoying his time there like anyone else. Some of the cast of Arrow were signing and though staff said, “No photos“, no one complained

about a few camera shots from afar. Lou Ferrigno was especially kind about photos and about spending time talking with fans. Many actors, artists and authors were.

The fans themselves were heroes and heroines. People tried to be conscientious about giving room and time for pictures, apologizing for bumping into a fellow attendee, giving helpful hints to each other, directions and making trades. One attendee gave up his much-coveted raffle ticket to a vendor who waited in line for an hour just to be told at the end that exhibitors were exempt from that particular raffle. The attendee and vendor had struck up a friendly talk during their wait time and the attendee gave the ticket over because he knew how important that item was to her. Stories like that are not rare.

Fans wanted other fans to enjoy the experience. The human connection, that need to see your
fellow man/woman be happy ruled the day, every day, for the most part. Costumes were admired, stories exchanged, laughter shared. These were your every day heroes. Perhaps not everyone was a hero, but at least at a ComicCon, most people aspire to hero-like behavior.