CHILDRENS BOOK: FROM SAGGING TO SUCCESS BY FLORENCE M. HOWARD 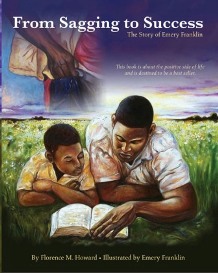 From Sagging to Success
by Florence M Howard, Illustred by Emery Franklin

“From Sagging to Success” is a message to urban youth and the adults who want to help them become extraordinary. Young people are unfairly judged because of their appearance and cultural misperceptions. They need to be made aware of the repercussions of sagging. Sagging pants even might be an indication of a sagging mindset or low self-esteem. A fictionalized character in book illustrations, Derrick goes from sagging to success as he learns about Black history, reads books read and written by successful people and changes the way he thinks.
He shares his new knowledge with his parents who also embrace a positive outlook, productive behaviors and principles of success. At the end of the book, Derrick and his parents have successfully transmitted principles of success to the next generation. The book is beautifully illustrated and the paintings were created first as a library gallery exhibit.

The book educates readers our history and successes, illuminates concepts of success and inspires them to act on what they learn. Readers are motivated to examine their thinking patterns, to recapture the dreams that they laid aside or never attempted and to accomplish them. They gain the wisdom and tools to become successful and are equipped to share those ideas, concepts and actions with others.

Excerpt from Introduction – From Sagging to Success

Author Note: The book contains 15 paintings by illustrator Emery Franklin. The 14 of the illustrations are from his narrative art series, Crossroads: From Sagging to Success art series, that was on exhibit at the Benjamin L. Hooks Library during February 2011.

Sagging is the fashion style of intentionally wearing your pants so that your underwear shows. This style is much older than the last 15-20 years. The trend can be traced back to urban teenagers of the 1970’s and the popularity of silk underwear. As one friend put it, “We sagged because it was cool and to show our manhood. It was our way of saying, ‘Look! I’m wearing silk, these ain’t cotton.’” If you’re under the age of 15, ask your mother, grandmother or aunt, if she wore bell-bottoms, platform shoes, halter tops and mini-skirts during her teens. Chances are she did. Fashion trends come and go, and come again.

MTV, BET, YouTube, and DVDs have transformed this 1970’s rite of passage into a universal statement of individuality. It has lasted and lasted and crossed generational lines. Baby boomers in their 50’s and 60’s have been sagging along with their grandchildren.