He’s seen a lot, done a lot and now he’s taken his experience, training and imagination to the page to write RESOLVE, a thriller that was just nominated for Best First Novel by the International Thriller Writers Organization.

We caught up with J.J. Hensley this week to ask him about himself, his nomination, book, life and future.  Of course we asked him some questions very specific to his former career as both a police officer and former Special Agent with the U.S. Secret Service. 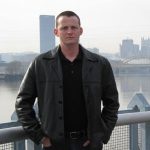 Sheila:  J.J. tell us how you use your former careers to give life and believability to your books.

J.J.: I did my best to bring my knowledge and experience from law enforcement into the book, without it becoming too dry or technical

My past experiences carrying a badge played a huge role in the creation of Cyprus Keller.  I went through the same cycle that he did, where I studied Criminal Justice and had some basic beliefs about how the system should work.  Then, I worked the streets and found that there are a lot more gray areas than text books and professors ever indicate.  Needless to say, any references Keller makes to his law enforcement training are pulled from my own time in the profession.  There is also another character named Brent Lancaster who is a former Secret Service agent, so I toss in a few pieces of information through him as well. .  I’m also very sarcastic and self-deprecating, so naturally the protagonist displays some of those qualities as well.

Sheila: Cyprus is your main character in RESOLVE.  Tell us about him.

J.J.:  Cyprus Keller is a former police officer and former probation officer who became a university professor.  After spending years of putting away hardened criminals, he pursues a career in academia as a way of getting back to his basic belief about the concept of justice.  However, when one of his students is murdered and his own graduate assistant tries to kill him, Keller gets backed into a corner and again finds his personal concept of justice is shaken.  Keller is driven by a need to balance the scales and a desire for revenge.  It’s up to the reader to determine if those needs should meet each other at a moral crossroads.

Sheila:  I’d like you to tell us a bit about the book and then we’ll add an excerpt before we switch gears and talk about the nomination for Best First Novel.

J.J.: Resolve is a mystery set against the backdrop of the Pittsburgh Marathon. Throughout the 26.2 “miles” (chapters), the reader learns through a series of flashbacks how the protagonist has been pushed into a corner, and why he’s going to attempt to take justice into his own hands. It’s a very different kind of novel and I never expected it to do as well as it has done.  It’s a fun book, but I was afraid it wouldn’t be for everyone since it deals with some tough questions about the human conscience and also involves a bit of distance running.

During these pre-race moments, adrenaline usually makes me feel light and free.  But the full gravity of comprehension is making me feel like the road and my shoes are magnets with opposing charges.

As the starting gun goes off and the tidal wave moves forward, I can’t help but do the rough math in my head:

Out of the 4,500 people who start the marathon, many will not finish.

Over 200 will simply stop running, realizing that it just wasn’t their day.

Another 100 or so will get injured and have to stop to get treatment.

And I know that 1 is about to be murdered.

I didn’t come across this information by happenstance.  I didn’t inadvertently overhear it in some random conversation on the street.  It didn’t fall into my lap when I got copied on an email by mistake.  There’s no real mystery as to why I know this.  I know a man is going to be murdered for one simple reason.

I’m going to kill him.

Sheila: Tell us about when you found out you’d been nominated by ITW for Best First Novel.

J.J.: I actually found out from another finalist (Gwen Florio – Montana) and I thought it had to be a joke.  Then I remembered that Gwen is funny, but not cruel.  I guess it still hasn’t quite set in.  Resolve was published by a small press and often those books can get overlooked, but ITW doesn’t play favorites.

Sheila:  What was it like to see that your name was listed there as a finalist with so many other amazing authors?

J.J.:  I’m a fan of Gwen Florio, whose book is also in the Best First Novel category and  I’m also a huge fan of some of the finalists, such as Stephen King and Lee Child, who are in other categories.  To have my novel mentioned on the same list as book by authors that talented is surreal.  I’m going to the awards ceremony in New York City this summer and, although I used to stand next to Presidents and Prime Ministers, it may be difficult for me to not be a little star-struck when I see some of the attendees.  I’m sure I’ll start acting irrationally by speaking slow – being afraid I’ll end a sentence with a preposition, or say “who” when I should have said “whom”.  Who knows?  Or Whom.  Whatever.

Sheila:  If you could co-write a book with another thriller writer, who would it be and why?

J.J.:  That’s a great question!  I have a unique writing style, so it would be interesting to see how something like that would work.  I tend to write the way people talk and I try to avoid any lofty or pretentious-sounding language.  I like authors like Lee Child who use direct dialogue and authors like John Verdon and Harlan Coben who don’t fill pages with words that ultimately don’t add value to the story.  He’s not in my genre, but I think Ben H. Winters is an incredible writer of straight, plain dialogue as well.

Sheila:  In training for law enforcement and working for the secret service were you ever surprised to learn something about human nature or crime that was totally unexpected?

J.J.:  There are so many things… let me list the top 3 things I learned about human nature and crime through experience.

1.  A lot of very good people are capable of doing some very bad things under the right circumstances.

3.  There is a small percentage of the population that has no conscience.

Sheila: So what’s in the future for you?

J.J.:  I have two books coming out with another small press, Assent Publishing.  Those manuscripts are complete and will be coming out over the next two years.  I’m currently working on converting a novella I wrote into a full-length novel.  I’m not sure what will happen with that one, but it will be fun to find out.

Sheila:  And where else can people find you online?

DOWN IN NEW ORLEANS BY HEATHER GRAHAM I didn’t do it. Those are the words Ann Marcel’s ex-husband, Jon, mutters the day he staggers through her...