Confessions Of A Romance Cover Model by CJ Hollenbach 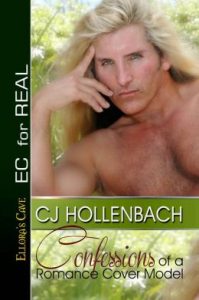 More than just a pretty face, killer pecs and long blond locks, CJ Hollenbach has been a shiny fixture in the romance world for more than twenty years. You could hate him for being beautiful, but then you would miss out on his warmth, wit and hysterical accounts of his adventures.
In this memoir, CJ reprises some of his favorite tales previously published in blogs and magazines (including his column in Lady Jaided) and he has added some new ones that might surprise even those who thought they knew everything about him. Being a romance cover model is not all roses and pirate shirts, but CJ has navigated its treacherous waters with humor and grace—and lived to tell the tales.

My parents say that even as a toddler, I could never seem to keep my clothes on. I was forever running around the neighborhood naked. So it isn’t too surprising that I ended up on the pages of Playgirl not once but twice. Alas, I’ve yet to have my own centerfold spread, though.

For those of you who don’t know, the centerfold is the featured model of the month. His picture is on the cover, and he gets the biggest spread in the magazine with a fold-out, pin-up-sized picture in the center of the magazine. The magazine has asked me to be a centerfold three times, but for some reason it never panned out. There’s still hope. I’m not dead yet.

My first experience with the magazine was less than stellar. I sent them photos on a dare when my modeling career was in a lull, just to see what they would say. To my surprise, I heard back from the editor in less than a week, with rave reviews. “You’re gorgeous!” the letter gushed.
“Would you consider becoming a centerfold?” It also asked for more photos.

Two years and hundreds of photos later, I finally landed in the magazine— with a splash. When you decide to appear in “that magazine”, there are lots of factors to consider other than, Do I want the whole world to see my wiener? Living in Smalltown, USA, I also had to weigh the impact on my family. They weren’t exactly turning cartwheels at the prospect of my exposure. After I told my father, he said, “Just don’t embarrass us!” I laughed and thought, Oh, NOW you tell me! I also informed my boss at the grocery store where I worked as an assistant manager (Yes, can you believe it?) that I was appearing in Playgirl. He didn’t mind. He figured it might be good for business, and it was.

I had no idea the firestorm that would follow my appearance in Playgirl. The local newspaper ran a front-page story with a huge photo captioned, “Sneak a Peek at a Familiar Face in Playgirl,” and another paper ran “Local Man Bares All for Playgirl.”

My mother faced the public’s disapproval as well at her hair salon, Betty’s Curl Up And Dye. She overheard two women chatting about that scandalous man who was in Playgirl. “I don’t think he’s so hot,” one commented. The other blue-haired harpy agreed. My mother, who must have been high on the smell of the perm solution finally screamed, “That’s my SON you’re talking about!” The two old crones clammed up. Go, Mom!

Being in Playgirl isn’t without cache, but there is a stigma that goes along with it too. It did open a few doors, and I know it closed a few as well. People called for TV and radio spots. I also got a few job interviews out of it, but I think some people just wanted to meet me and were a tad disappointed when I didn’t show up naked. While I was still working at the grocery store, an irate customer called and demanded that I be fired. Luckily, I took the call. I asked the uptight priss,

“Have you even seen the magazine?” “No,” she replied.

“Then, what are you complaining about?”

CJ Hollenbach has been a fixture in the romance industry for the past 20 years. He was a contestant in the first ever “Mr. Romance Novel Cover Model Pageant” at a Romantic Times Booklovers Convention in San Diego over 20 years ago. CJ had previously modeled for Playgirl magazine as well as several other national publications. He also appeared on numerous TV shows such as The Jerry Springer Show, The Joan Rivers Show,The Gordon Elliott Show, The TODAY Show, M-TV, Entertainment Tonight and was a contestant on The American Gladiators Show as well. The model’s striking resemblance to romance cover king, Fabio brought him national attention. Hollenbach has graced the covers of dozens of romance novels. He was the first male model to appear on an Ellora’s Cave erotic novel.

Sneak Peeks are our way of introducing new authors and books to readers! Please show your support by sharing and/or commenting! Thank you!