The Romance Bookmark Radio Show: 15 Minutes of Fun and Romance

Need a laugh, something different and some ideas on what’s good to read?  COS Productions, parent company of Reader’s Entertainment has made some changes to their radio line-up, starting with the cancellation of Canned Laughter and Coffee in order to make way for a romance genre focused show called The Romance Bookmark. 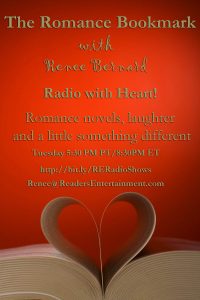 Canned Laughter and Coffee show host, Renee Bernard, will be heading up the new show and using her unique approach and penchant for comedy to make the 15 minute show something unique.

“We want to talk to authors about things most other shows don’t,” says Sheila Clover English, CEO of COS Productions.  “The show is strictly romance authors and though Renee may talk about their books, the main focus of the show is getting to know the author in a new and fun way.”

The new show begins on May 20th with guest Kathryn Maeglin.  The show has a new logo and a different approach to the episode descriptions that gives listeners a good idea of the flavor of the show.

A description of one of the future shows says this:

Check out this blurb about their book and listen in while I ask them questions that may not even have to do with the book. So, uh, yeah, read the blurb.”

And though you can read the blurb, you can see there’s a good chance the interview could go in a totally unusual direction from your typical author interview.

Renee Bernard, the show’s host is a romance writer herself and though she’s most well-known for her historical romances the author was just signed by one of the big publishers for a new paranormal series that will have readers laughing while still delivering on sexy romance.  A look at her “About Renee” page from her author website gives some insight to the host’s style.

The show takes over the Canned Laughter spot on Tuesday nights at 8:30PM Eastern/ 5:30 PM Pacific and lasts only 15 minutes.  The short form show has been successful for Canned Laughter, but with more focus on humor, romance and learning something new about the guests it’s believed The Romance Bookmark will bring in even more listeners. You can find out about future guests for The Romance Bookmark and Reader’s Entertainment Radio at http://www.blogtalkradio.com/circle-of-seven/.

Have we got a bouquet of beautiful books for your weekend! Our picks of the season share more that gorgeous floral cover art; These...