Four stories based on a mysterious crypt.

A Charm of Grey by Jocie McKade

The Bitter Taste of Time by Wendy C. Williford 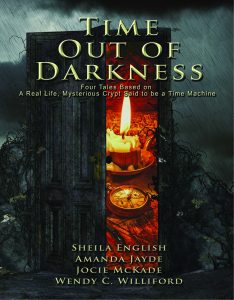 Writing has always been a dream for Sheila. She’s written plays, journal articles, news articles, copy, scripts, short stories and books.  Living that dream is a passion she follows daily as a script writer, an author and news reporter.

I’ve been telling stories for years, but it wasn’t until about 10 years ago that I began writing them down.

A few years after that, a very good friend of mine told me about a contest Romantic Times Magazine was having.  They were looking for short Erotica stories , up until then everything I had written had been very sweet and when faced with this I didn’t think I could do it.  However, with her support and a little nagging I came up with a story that I was happy with.  Imagine my surprise when I was told that I was one of twelve finalists.

Since then I’ve tried to write every chance I get.  I usually have a story in my head, one finished and one or two in progress.  I also had the great pleasure of writing scripts for Circle of Seven Productions.  A wonderful company that invented and perfected the Book Trailer™.

Now, after many years of waiting, I am proud to have my books available to the public.  I hope it’s a relationship that lasts many years and I hope you enjoy reading my stories as much as I enjoyed writing them.

I live in the boonies of the Midwest USA surrounded by cornfields, cattle, and chickens.

I met my husband under the hood of a car.  I love cars and he was a mechanic, you might say we were a match made in RPM heaven. We’ve been married a really long time and have an amazing family that rarely claims us a parents.

I have an office mascot named Diesel the Wonder Dog, who will “tinkle” at the slightest provocation, but he keeps my feet really warm and helps pick contest winners with encouragement from the snack bag.

I am also the Senior News Editor for Reader’s Entertainment News and scriptwriter for COS Productions. My articles have appeared in Elks Magazine, Family Tree Maker, Dog Fancy, RWA University, RWA Reports, Lake Erie Living, Fate Magazine, Chronicles of the Old West, Family Motor Coach, and dozens of others

Wendy C. Williford is a native Texan who began writing stories as early as the 5th grade. By the time she was 17, she had written her first unpublished novel and a broad collection of poems and was awarded poet laureate of her graduating class. Since then, she has written dozens of short stories, poems, and a screenplay. She received a BA in History with a minor in Creative Writing from Stephen F. Austin State University in 2007. Currently, she is working on a novel set during the Scottish War for Independence.

Ms. Williford has works published in Ascent Aspirations, Children, Churches & Daddies Magazine, Allegory, The Wordsmith Journal, Gravel Magazine, Sanitarium Magazine and The New Plains Review. She has stories also appearing in Bare Minimum and Art Is Not Meant To Be Touched anthologies. Planned for 2014 are appearances in Down In The Dirt Magazine, Livid Squid and Floyd Country Moonshine. She blogs about her experiences as an author and writer at