Medically retired FBI agent William Harrison struggles against his own sense of uselessness along with lies, deceit, and sinister assassins to discover the truth about a decades-old government cover up of alien contact code-named, the Saint Mary Project. Truth Insurrected: The Saint Mary Project by Daniel P. Douglas. Find out more at http://www.DanielPDouglas.com 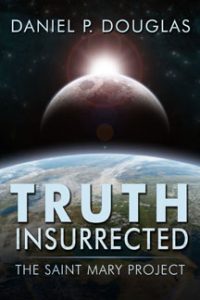 Daniel P. Douglas is a rising novelist specializing in conspiracy thrillers and science fiction. His first anticipated novel, Truth Insurrected: The Saint Mary Project, is a conspiracy thriller set in modern times that centers around a decades-old government cover-up of the existence of extraterrestrial life. Another novel in the line-up includes The Outworlds: Grey Frontier, a science fiction adventure story set in the 24th century at the fringe of human civilization. One other anticipated novel is Green Bird, a modern-day thriller about an FBI agent’s struggle to stop a cyber terrorist before it is too late.

Daniel has studied Political Science, Geography, History, Aviation, Russian Area Studies, and many other topics. He is a veteran of the US Army and a long-term civil servant, having worked many years in the museum profession and federal government. Daniel was born and raised in southern California. With the exception of several years in the greater Washington DC area, Daniel has lived most of his life in the southwestern United States. New Mexico is where he makes his current home along with his spouse, kids, siblings, parents, pets and livestock. Daniel enjoys traveling and has visited many locations across the United States, Canada, Mexico, Europe, Middle East, and Caribbean.