A revolution has taken over the government of the United States and the environment has been saved. All pollution has been banned and reversed. It’s a bright, green new world. But this new world comes with a great cost. The United States is ruled by a dictatorship and the corporations are fighting back. Joining them are an increasing number of rebels angered by the dictatorship of Chairman Rahma. The Chairman’s power is absolute and appears strong, but in The Little Green Book of Chairman Rahma by Brian Herbert, cracks are beginning to show as new weapons are developed by the old corporate powers, foreign alliances begin to make inroads into America’s influence . . . and strange reports of mutants filter through the government’s censorship. 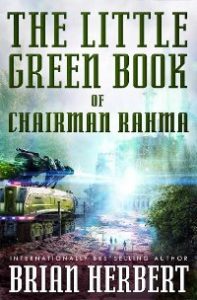 Brian Herbert is the author of multiple New York Times bestsellers. He has won several literary honors including the New York Times Notable Book Award, and has been nominated for the highest awards in science fiction. In 2003, he published DREAMER OF DUNE, a moving biography of his father Frank Herbert that was a Hugo Award finalist. His acclaimed novels include SIDNEY’S COMET; SUDANNA, SUDANNA; THE RACE FOR GOD; TIMEWEB; THE STOLEN GOSPELS; and MAN OF TWO WORLDS (written with Frank Herbert), in addition to the HELLHOLE Trilogy and DUNE-series novels co-authored with Kevin J. Anderson. Brian published OCEAN, an epic fantasy novel about environmental issues (co-authored with his wife, Jan). Brian’s highly original SF novel, THE LITTLE GREEN BOOK OF CHAIRMAN RAHMA released in 2014. See his website: brianherbertnovels.com for book touring information.