The End of the Universe is nigh …

Landscape architect jixX is way out of his depth when mistakenly appointed captain of a dangerous space mission. He’s never flown a spaceship before, but at least he’s not alone; none of his crewmembers have, either. To make matters worse, the ship’s computer thinks it’s a comedian.

So the last thing jixX needs is an encounter with aliens, particularly a bunch of nutty religious fanatics. They believe in the existence of The Ultimate Inferior Beings, a species so totally inept at everything that, according to an ancient prophecy, their incompetence will bring about the end of the Universe. One alien becomes convinced that humans are this bungling species and that the only way of saving the Universe is by destroying them.

So it comes down to jixX to save Humankind.

It would be fair to say that Tenalp, being the remotest of Earth’s colony planets, had never attracted the finest minds. All the best people – the most intelligent, the most creative and the most highly skilled – had settled elsewhere, leaving Tenalp with what was left. So it was no surprise that many of the planet’s inhabitants, particularly those at the higher levels of authority, were somewhat lacking in brilliance or, in Tenalp parlance, as dumb as a bag of bricks.

The three flight controllers crowded around smuX’s terminal with looks of bewilderment and concern. Above the din of a warning buzzer could be heard mutters of “This is impossible!”, “What’s going on?”, “Doesn’t make sense!”

smuX chewed his nails as he stared at the video-feeds and data streams on his screen. “pliX, go tell droX,” he said, not taking his eyes off the console.

“I know, I know. But he’s spaceport controller now, so we have to let him know what’s happening.”

“Just tell him there’s an emergency. Remember: keep it simple. Words of one syllable.”

smuX flashed him a grin. “Good point. Try to find a one-syllable alternative.”

pliX hurried out of the Operations Room and raced down the corridor trying to think of a monosyllabic synonym for ‘emergency’. By the time he burst into droX’s office the best he had come up with was ‘crisis’.

He froze. With open mouth he stared at what his superior was doing.

droX froze too. The hand that had been twirling a cotton swab deep in one ear stopped twirling and the cheeks reddened. The men’s eyes locked for a second. Then the seated man whipped the swab out of his ear and tossed it at the recycler. His other hand shot out to switch off a pink nose-trimmer, still buzzing on the desk in front of him, and to sweep it into a drawer. The same hand also swept a mirror, a pack of cotton wool and some bottles of ear drops into the same drawer before pushing it shut.

pliX hardly noticed. His eyes were glued to the trajectory of the swab as it bounced off the rim of the recycler and headed in his direction, spinning gracefully as it sailed through the air. He tried to dodge out of its way, but wasn’t fast enough to prevent it landing on his right foot, a glistening blob of orange at one end. No sooner had it landed than he flicked it off with a jerk of his leg; but, too late. Part of the orange blob remained on his shoe.

“You were saying?” asked droX, his arms folded, his desk clear.

pliX tore his eyes from the orange globule; he’d have to clean it later. “It’s The Living Chrysalis, sir. She’s coming in to land.”

“And that’s an ‘emergency-er-crisis-sir’, is it, pliX?” The older man cracked a smile and rubbed his nostrils between finger and thumb.

“A spaceship, coming in to land at a spaceport?”

“The Living Chrysalis is a starship, sir,” corrected pliX.

“And she’s due here in September.”

droX’s eyes flicked to the calendar on the wall. “So it is.”

“So she’s over six months too early.”

droX leaned back in his executive chair. “Better early than hurly-burly, I always say.”

“No, sir,” said pliX, a note of exasperation entering his voice. “She’s far too early. She’s made the journey from Earth in under a month, sir. And that’s against the Laws of Physics.”

droX took a deep breath. “Ah, yes, the Laws of Physics. F=ma, E=mc2, and that other one.” He stroked his chin. “So, let’s see if I’ve got this straight. This spaceship… sorry… starship is coming in to land, earlier than the Laws of Physics allow? Is that it?”

“You need to come quickly. She’s landing any second…”

droX raised a calming hand. “Better to think, than blinking sink. Let’s have all the facts first, shall we?”

“What does her captain say?” asked droX.

“We don’t know. We really don’t know what’s going on.”

“It wouldn’t look good if…”

pliX’s patience had nearly run out when, with a heavy sigh, droX raised his large frame from his seat. “All right, I’d better take charge of this one. We don’t want any mistakes.”

pliX gave a hesitant pause at the last statement. “Er, no, boss,” he said. Then added, “Sorry for interrupting…’

“Oh, just taking a break,” said droX, casually stepping over the cotton swab on the floor. “I’m a busy man, you know. But I’d rather you knocked next time.”

The two men left the room and strode down the corridor. pliX, young and keen; his boss, older and wider. As they approached the Operations Room there was a tremendous roar, a seismic thud and the whole floor jerked from underneath them, making droX lose his footing and fall to the ground. He lay on his back for a second, thrashing his limbs like an upturned beetle, before the younger man pulled him back up. The tremors faded and the corridor filled with the din of alarms as droX brushed himself down, swearing under his breath.

“Sir, she’s crashed on the landing strip!” cried smuX, emerging from the Operations Room and having to yell above the noise.

“Crashed?” shouted droX, rubbing the side of his leg where he had landed. “What happened?”

“Pretty sure. I’d say we’re clear of blame on this one.”

The spaceport controller gave a nod.

“Any idea why she’s so early?” asked pliX.

“We’re thinking some phase-shift in the singularity field. A shift from Newtonian to non-Newtonian, maybe some massive antineutrino flux.”

“A rupture in the brane, maybe?” suggested pliX.

“Alright, alright,” interrupted droX. “Let’s get into rescue-operation mode, shall we. And get some facts to guide our acts.” He headed for the exit, limping slightly. smuX and pliX exchanged worried looks and hastened after him.

Outside the building the alarms were less overpowering, but the roar of engines and screeching of tyres more than made up for it. The emergency services were in full swing, their bustling activity converging on the centre of the landing strip where lay the vast, crumpled hull of The Living Chrysalis, a Class ZN-4 starship, hissing and smoking after her crash.

The rescue team were already perched high up on her side, drilling into her hull. After a short time the chief rescuer called, “We’re through!” He handed his cutting gear to a subordinate and scampered through the hole. Everything went deathly quiet.

A minute passed. Then another. The crowd became impatient, but then the chief rescuer’s head reappeared at the hole. He had a troubled look on his face as his eyes searched the crowd, finally latching onto the overweight figure of droX. He beckoned the controller to come up and see for himself what was inside.

Inside it was dark. droX and his two companions followed the chief rescuer through a crumpled corridor to the starship’s main control room, now eerily lit by the emergency lighting system and smelling strongly of burnt circuitry and melted plastic. They stopped at the sight that met their eyes. Lying scattered amongst the dust and rubble, were several human skeletons, their chalk-white bones arranged in ghastly postures, their skulls grinning hideously.

The chief rescuer pointed to a corner of the control room, and the others gasped when they saw what he was pointing at.

Lying propped up against the wall, was an old, old man; his body little more than skin and bone, his hair and beard silvery and long. They could see he was still breathing, still alive. He looked as though he had aged well beyond his natural lifespan – the sole survivor of the ship’s crew of ten.

“I guess that explains the pilot error,” muttered droX.  The rescuer stared at him, appalled, but the others didn’t react.

“How can this have happened?” wondered pliX aloud. “After only a month in space!”

The four men picked their way through the rubble and skeletons. The man groaned and, on becoming aware of company, looked up and opened his mouth to speak.

droX elbowed his way past the others and indicated he was taking charge of the situation. The others exchanged uneasy glances but stepped back to give him room. The spaceport controller knelt down slowly, wincing at the pain in his leg, and put his left ear to the old man’s quivering lips. The latter swallowed hard before croaking a few words in a faint, broken whisper, his every muscle seeming to strain with the effort. Then he closed his eyes, exhaled a final breath and slumped sideways… dead.

droX bowed his head and remained on his knees for a few seconds. “Damn!” he said.

“What did he say?” asked pliX.

The controller grimaced in frustration as he got to his feet. “I don’t know, dammit.” He put a finger in his left ear and waggled it about. “This blasted ear-wax! Can’t seem to shift it. Didn’t catch a single word.” He looked down at the corpse and sighed. “It sounded important, too.” 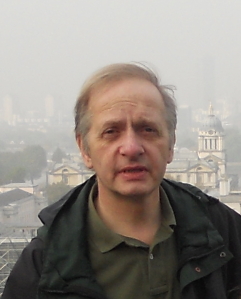 Mark Roman is a research scientist living in London with his wife (also a scientist) and two young children, neither of whom wants to become a scientist. He writes during his spare time or when no one is looking. Currently he is working on his second book, via e-mail, with an ex-architect who he’s never met. They’ve agreed to resolve any disagreements by fighting, but happily live too far apart to make this practical.