Before the Dark, the 13-episode video web series enjoyed by tens of thousands of fans completed last week to much fanfare, including an event where fans guessed who killed one of the characters.

Producer/Writer/Director Sheila Clover English of COS Productions who has produced dozens of book trailers for Mrs. Feehan since 2001 and who worked on the Before the Dark series had many adventures during the making and editing of the show and here she does a candid interview talking about 10 things you didn’t know about the series.

“It’s always fun to know the behind-the-scenes antics and I thought the fans would appreciate the laugh.”  Says English.  “I would love to know, of the 10 things I reveal, what is most surprising to the fans.”

Be sure to leave a comment saying what surprised you the most to learn! 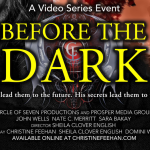