Against a devastated, post-apocalyptic landscape, a legion of one hundred fierce half-angels is hell bent on purging the Earth of all humans. But one of them, the tormented Tiamat, struggles against his mission, and when he rescues a beautiful woman named Kali, he finds the attraction as troubling as it is dangerous. Can Kali trust the one creature who could be responsible for her ultimate demise? 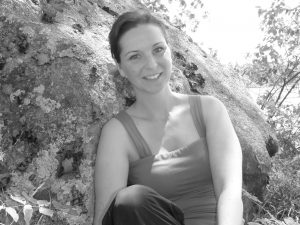 D.H. Nevins was born in Toronto and currently lives in a relatively remote area of Ontario, surrounded by forests and lakes. By day, she is a personable, friendly school teacher. By night, she silently chuckles as she writes about angels destroying the world. When she isn’t writing, she enjoys hiking, camping, traveling the world, flying around on her motorcycle or dabbling in live theatre.