In a future world where humans are in danger of extinction, the US government is taking desperate measures to preserve a declining population caused by decades of climate change and destruction to the environment. Weather related catastrophes are a common place and coastal cities are under water; people are destined to live in submarine-like underground shelters. Roe v. Wade is overturned and abortion is once again illegal. Lucinda Monticello, Supreme Court Correspondent, is pregnant with an unwanted child. She makes a rash decision to illegally abort her fetus without consulting the father, Alex Bennett, a renowned geneticist.

As Lucinda struggles to cope with her decision, she becomes the victim of an underground abortion ring. An elite group of medical terrorists have stolen aborted fetuses and developed a technique to harvest them outside their mothers’ womb. With keen motherly instinct, she senses her unborn child may still be alive. Meanwhile, Alex has fallen prey to the terrorists and is now missing. Lucinda must search for the truth and try to reclaim her aborted child.

Lucinda Monticello stood in front of the Supreme Court Building in the nation’s capital. Trying to avoid eye contact with the masses hovering around her, she focused instead on a lengthy row of bluish green porta-potties in the distance, which were more appealing than the dingy clouds drifting above the stagnant air. Off to the side, a comforting row of cops neatly lined the crowd, armed and ready to act if necessary. The crowd was quiet, expectant, and divided. At that moment, only the Supreme Court Justices, Lucinda, and her fellow reporters knew the outcome of the Court’s monumental verdict.

Her knees nearly buckled as she waited anxiously for her go-ahead cue from the studio. Within seconds, a dreaded voice flooded her earpiece like a bursting dam. She hesitated for a moment and then regained her perky demeanor as she moved her dry lips closer to the microphone. She cleared her throat to articulate words she utterly opposed. “Good afternoon, reporting live from the steps of the Supreme Court Building in Washington, DC, this is Lucinda Monticello, Supreme Court Correspondent, reporting for USB News. On this Tuesday, the 17th of January, 2062, the US Supreme Court, in the case of Parsons v. United States, has upheld the American Population Preservation Act of 2061 by a six to three vote, thereby ruling abortion illegal in the United States of America. This decision overturns the landmark ruling of Roe v. Wade, which has been in place for eighty-nine years.”

Her voice was drowned out by both cheers of joy and harsh cries of disbelief. A massive group of protestors chanting “freedom is dead” took center stage while bold banners saying “killing babies is over” waved high above the supporters. The tidy row of cops broke, moving forward towards the unruly crowd.

She took a deep breath and continued, “After months of intense deliberations, the Supreme Court has affirmed the decision of President Montgomery and both chambers of Congress in their attempt to take extraordinary measures to preserve the US population, which continues to be devastated by extreme weather patterns caused by decades of climate change. The Supreme Court has concluded that preservation of life takes priority over maintaining the act of privacy and a woman’s right to choose. Please stay tuned to USB News for further developments and reactions to the ruling. This is Lucinda Monticello, reporting live from the steps of the Supreme Court.”

Quickly mounting the steps, she headed back to the safety of the Supreme Court Building to gauge the media’s reaction. She focused her attention on Kenneth Kale, co-anchor of Your World News, who secured the first interview with Reverend Christina Lamont, president of the Anti-abortion League.

“Reverend Lamont, you must be thrilled with the ruling?”

“Yes, I most definitely am,” Lamont began, looking directly into the camera. “I want to personally thank all of my supporters around the country for your tireless efforts and attention to this most important cause. Today is truly a glorious day in America. Justice has finally prevailed. No more unnecessary killing of unborn babies when so many lives have already been lost by our own acts of irresponsibility.” She turned to look at Kenneth. “My prayers have finally been answered.”

“What’s your next step?”

“We’ll focus attention on shutting down abortion clinics all over the country. All unborn Americans now have a future. They’ll live as God intended. We’ll support unwed mothers and teenage girls,” she said, looking back at the camera. “America, your unwanted babies will have good homes. That’s a promise we’ll surely keep.”

“Thank you Reverend Lamont and congratulations on the victory.”

“God Bless America. Who’s she kidding?” Lucinda grumbled as she stomped off to the restroom.
I’ve heard more than enough. Something has to change. It just has to. 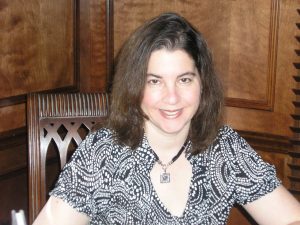 Diane J. Bleyer is a graduate of Emory University, earning a BBA in Finance and Management. She worked as a Management Consultant, specializing in strategic business planning and implementation for healthcare companies. Through her work, she acquired the skills and inspiration to develop “out of the box/forward thinking” concepts. She is eager to take a stance and represent her passions and ideals, which are evident in her writing and in her personal life.  Native to St. Louis, Missouri, Diane is an active volunteer and community leader. She served as President of Hadassah’s St. Louis Chapter, which is part of a 300,000 member women’s organization.  She also served as a Vice President on Hadassah’s Great Plains Region Board, advising multiple Hadassah chapters throughout the Midwest and teaching strategic planning.  She currently serves on a Renewable Energy/Green Team Committee and is a member of the St. Louis Writers Guild and The Association for the Study of Literature & Environment. Diane is currently working on her second novel, The Clone Harvest.