Comics are books too!  Cincinnati Comic Expo invited Reader’s Entertainment to their event this year in an effort to expand into fiction and offer their attendees even more variety

The popular event held in early Fall each year in Cincinnati, Ohio continues to grow and this year is no exception.  With over 16,000 attendees this year the event is non-stop action that even Superman would have a hard time keeping up with.

Literary fiction has grown in popularity with this audience and the show coordinators asked Reader’s Entertainment to bring authors the audience would love.  Invited to the RE booth was bestselling author C.L. Wilson, Shiloh Walker, Maggie Mae Gallagher and Sheila English.  The authors were asked to do a panel about what makes heroes sexy and there were a large number of people who attended that talk.

Back at the booth, the authors sold books, merchandise and gave out swag galore. 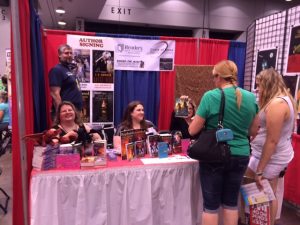 C.L. Wilson, who writes epic fantasy and romance recently had a release, The Winter King which was well received at the Expo in addition to her Tairen Soul series and her little toy kittlings, of which she sold out.

Shiloh Walker, a bestselling author and local favorite, sold several from her series, both thrillers and urban fantasy.

Maggie Mae Gallagher, relatively new on the scene but already building a strong following, sold her urban fantasy and Sheila English gave away a free electronic copy of the anthology she is in entitled Time Out of Darkness.

Time Out of Darkness includes time travel stories, something especially popular at this expo since Paul McGann, the 8th doctor in the hit show Doctor Who was a guest there.  So a lot of Whovians were wandering around already enthusiastic about time travel. 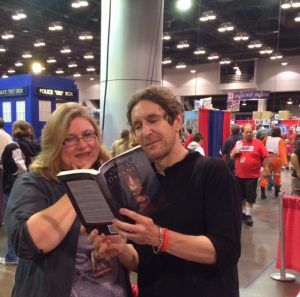 The author had a great time meeting new readers and having many of the costumed attendees hold their books for photo ops.  And a few were able to get celebrities to pose with their books as well!

“Yeah, but I can beat hobbits, dwarfs, storm troopers, princesses and pretty much anything else, cause I got a picture with a Time Lord!”  Sheila English laughs as she points out her photos with Doctor Who #8 Paul McGann.

The show had a surprising number of celebrities from John Rys-Davies Indiana Jones/Lord of the Rings) to Henry Winkler (Happy Days/Click) and from Paul McGann (Doctor Who/Aliens 3)to Jason David Frank (Ninja Turtles) and Jewel Staite (Firefly/Serenity).  As usual, the event had artists, comic writers, comic legends and comic lovers.

The event also include Lego Land and an entire area dedicated to children.  It’s a family-friendly event with lots for kids, but also had COS Play, games and panels on a variety of topics.  There was something there for everyone and the entire weekend-long event was a huge success!