The small mountain town of Nugget, California, has a strange way of giving people unexpected reasons to start over—and find the most irresistible chances to fall in love…

Maddy Breyer needs to prove she can make her own life after betrayal blew up her previous happily-ever-after. Staying totally focused on renovating a decrepit mansion into a bed-and-breakfast might help her—and this recession-hit town—finally turn things around. But the mysterious new sheriff is the kind of lawbreaking temptation that’s an even bigger challenge to resist…

Detective Rhys Shepard is only back in Nugget long enough to care for his ailing father. He’s got a big-city promotion far away from this place that never accepted him. He does not need a sudden crime wave to solve. Or one leggy case of heartbreak stirring up all kinds of trouble and challenging his rules. Which might explain why he’s suddenly finding it hard to leave…

The place was modest to say the least. Maddy had to walk through the bedroom to get to the kitchen, and the bathroom was in the back of the house.

But with a little imagination, she could probably make it habitable. Maybe even cute. Since deciding on her move to Nugget she’d put off house hunting until the last minute. At least this little duplex apartment would only be temporary. As soon as the contractors spiffed up quarters in the soon-to-be-renovated Lumber Baron Inn, she’d move in there so she could supervise the entire overhaul. In the meantime, she could walk to the inn from here.

“So you taking the place?” The guy who’d introduced himself as Rhys Shepard, the duplex owner’s son, leaned against the doorjamb.

“Maybe,” she said, noticing the way his shoulders filled the doorway. Maddy suddenly wished she’d put on makeup, maybe even wore her hair down instead of piling it up on top of her head like a mop.

She gave the apartment one last walk-through, staring out the windows at the breathtaking views. She could see the river, snow-covered mountains, and the town, which from here looked almost quaint.

“Did the Donner Party come through here?” she asked. Ever since her brother, Nate, had found her holed up in her Pacific Heights Edwardian, inconsolable over her husband’s deception, and had dragged her to Nugget, she’d become obsessed with the tragedy. She stared out at a distant mountain peak and thought maybe it happened there. Maybe that’s where the snowbound pioneers started feasting on the dead.

She’d have spatchcocked Dave, that’s for sure.

She turned to face Rhys. “Is that why this street’s named Donner Road?”

“I’ll take it.” She reached in her purse for a checkbook. “Deposit and first month’s rent, right?”

“That’ll do you.” He continued to stand there while she wrote the check. “So, you’re fixing up the old Lumber Baron place?”

He grinned, showing a nice set of white teeth against his tan skin. “The whole town’s talking about it. No secrets in Nugget.”

She caught him checking out her wedding ring as she handed him the payment.

“Let me get you the key.” He disappeared into his dad’s side of the building and returned a few minutes later. “Here you go.”

“Thanks. I probably won’t need it until Monday,” she said, stashing the key in one of the zippered compartments of her handbag. “That’s when the movers are bringing my stuff.”

“You know what time? Mine’s also coming Monday. I don’t think there’s enough room in the driveway for two trucks.”

Her curiosity must’ve shown, because he gave her a tight smile and said, “I’m your new neighbor.”

“I thought your dad lives here?” The apartment barely had enough space for one person, let alone a second, tall, really built one.

“Me, too, now.” He didn’t elaborate, just jutted that strong square jaw of his at her in a way that said, Wouldya answer my original question?

“Hopefully in the morning. What time’s yours scheduled?”

He shrugged. “They’re coming from Houston, so whenever they get here. Maybe it won’t be a problem. We’ll have to play it by ear.”

“Something like that,” he said, and Maddy thought she detected a tint of bitterness in his voice. “When’s your husband arriving?”

When he’s done screwing our best friend’s widow. For all Maddy knew Gabby had already joined Dave in Paris. “I’m not sure yet,” she answered, gazing out at the railroad tracks. “Do the trains run frequently?”

“Only every four or five hours.”

As if reading her mind, he said, “Don’t worry, you’ll get used to it,” and flashed those pearly whites again.

Maybe it was just Maddy, but the smile seemed slightly sadistic. She got the feeling that moving here didn’t rank high in his top picks of places to live and you know what they say . . . misery loves company.

“Well . . . I guess I better get going. I have a meeting with the contractor and the carpenter.” Folding the rental agreement, she stuffed it in her purse.

He pushed himself away from the door. “I’m on my way to the bowling alley, too. Want a lift?”

She jerked her head up in surprise. “How’d you know the meeting was at the bowling alley?”

He grinned again. “I told you: no secrets in Nugget. You want that ride?”

She looked over at her new Subaru. The locals told her she’d need all-wheel drive for the rough winters. So she traded Dave’s right-out-of-the-showroom Porsche Carrera for an Outback and kept the change for her divorce fund.

What the hell. She’d take a ride with a stranger. It was just a short walk back and Maddy could certainly use the exercise. Ever since finding Dave and Gabriella’s emails she’d been eating nonstop, lying on the couch, watching the Shopping Channel, stuffing her face with Cheez-Its. At one point she’d thought about taking a pair of scissors to her husband’s designer suits, scattering his pant legs and jacket arms across the front lawn. Instead, she’d just wolfed down another morning bun. The Porsche had been Nate’s idea. All that business acumen had turned her brother vicious.

“Thanks,” she said and got in the passenger side of the Ford Focus while he held the door open.

“It’s a rental,” Rhys said. “My truck’s coming with the movers.”

Maddy tried not to roll her eyes. “You grow up around here?”

She fastened her seat belt and waited for him to say more, but he didn’t. “So what was that like? Growing up here?”

A deep chuckle rumbled through his throat. It was a good manly sound that gave her a little tingle. “I left as soon as I turned eighteen. So that should tell you how much I liked it.” 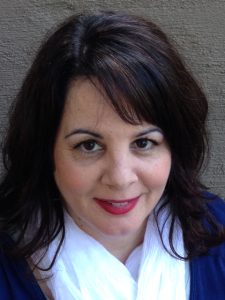