Book Review: Triumph of the Spirit by David Pilarski

Author David Pilarski’s novel, Triumph of the Spirit is a journey on many levels.  Eighteen year old Matthew has lead an uneventful life where he followed the path expected of him, but one day while working out in the field he saw a light shoot across the sky and fall to Earth.  Following it, he discovers a metallic oval that he brings home with him.  That night he begins to dream of people, places and times he’d not considered before.  The dreams seem so real and soon he finds evidence that they are affecting his real life. 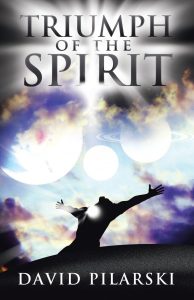 Matthew finds Samuel, his guide through these dreams, which Samuel tell him are lessons.  The adventure begins as Matthew encounters people through time and space who show their courage and willingness to sacrifice for what they believed in.

You realize early on that Samuel is guiding  Matthew to something much bigger and more personal and you feel yourself learning important lessons along the way.

Triumph of the Spirit has an adventurous journey with a philosophy that leaves you a better person for having read it.