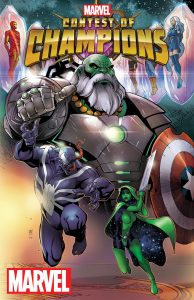 “The Marvel Contest of Champions comic book series merges the worlds of mobile gaming and comic book publishing, presenting each as a cohesive storytelling medium that complements one another,” said Kabam Chief Operating Officer Kent Wakeford. “Kabam is honored to collaborate with Marvel on the company’s first-of-its-kind project. It not only demonstrates mobile gaming’s strength as an entertainment partner, but it also exemplifies a unique way mobile games can crossover and connect to new audiences.”

“Through Marvel comics, movies, television shows and games, we strive to nurture our fans’ relationships with Marvel characters across their preferred media channels,” said Peter Phillips, EVP/GM, Interactive & Digital Distribution, Marvel Entertainment. “It was a natural creative effort to offer Marvel Contest of Champions, one of the most popular mobile games in the world, as a bold new comic series and expand that universe into one fluid entertainment experience.”

The Marvel Contest of Champions comic series will focus on popular Marvel Super Heroes that are featured in the mobile game, including Iron Man and Gamora. In addition, the comic will introduce new characters to the Marvel Universe that are also debuting in the Marvel Contest of Champions mobile game. For the comic’s debut issue, Kabam and Marvel collaborated on the development of a new character, Guillotine, a Super Hero who wields a powerful magic sword that’s been passed down through her family since the French Revolution. New York Comic Con attendees will be among the first to see her in action as well as fan-favorites Venom and Joe-Fixit, who are both appearing in the comic series and making their in-game debuts in October, at theMarvel Contest of Champions demo stations at Marvel’s booth.

Marvel Contest of Champions is the only arcade-style fighting mobile game that dives deep into the Marvel Universe. Heroes and villains from Marvel’s Avengers: Age of Ultron, Avengers, Thunderbolts, X-Men, Inhumans, Guardians of the Galaxy and more battle it out in iconic Marvel locations, in an epic storyline that stays true to classic Marvel storytelling. The game launched in December 2014 and surpassed $100 million in gross revenue in seven months, the fastest any Kabam game has hit that revenue milestone.

Kabam, Inc. creates, develops, and publishes games that are available on mobile devices via its own dedicated channel in the Apple App Store, Google Play, and the Amazon Appstore. Valued at more than $1 billion, Kabam is the 6th fastest growing company overall in North America, according to Deloitte LLP. The company has been profitable since 2012. Kabam’s Kingdoms of Camelotfranchise has grossed more than $250 million, making it one of the top 10 strategy franchises of all time. Kabam has also created four titles that have grossed more than $100 million each in their life. In 2014, Kabam had three titles rank in the Top 50 Grossing apps on the App Store. Kabam has more than 825 employees around the world, with corporate headquarters in San Francisco. The company’s investors include Alibaba, Canaan Partners, Google, MGM, Intel, Pinnacle Ventures, Redpoint Ventures, Warner Brothers and others. More information about Kabam can be found at www.kabam.com.

Marvel Entertainment, LLC, a wholly-owned subsidiary of The Walt Disney Company, is one of the world’s most prominent character-based entertainment companies, built on a proven library of more than 8,000 characters featured in a variety of media over seventy-five years. Marvel utilizes its character franchises in entertainment, licensing and publishing. For more information visit marvel.com. ©2015 MARVEL

(BOOM! Press Release) Discover the Fate of the Iconic Slayer in a Shocking New Post-Apocalyptic Future in December 2021 BOOM! Studios, in collaboration with 20th Television,...