Ash vs Evil Dead: The Show, The Panel, The Review!

Trick or treat?  This Halloween it’s all about the treat baby! 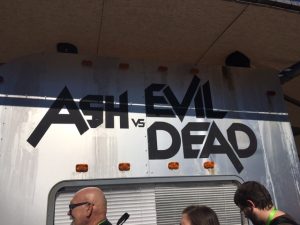 Because Ash vs Evil Dead, the television show on starz, picks up the tradition of campy, scary-as-hell, over-the-top gore with hilarity, demons and Ash the reluctant hero years after his fight with the Army of Darkness.  And Reader’s Entertainment was there in New York for the advance premiere of the show!

Director/Actor Kevin Smith of Clerks, Comic Book Men, and Jay and Silent Bob, moderated the Ash vs Evil Dead panel making it quite clear he was as much a fan as anyone else who attended the New York ComicCon 2015 panel for the new show that starts Oct. 31st.  He spoke briefly about how the movies inspired him to try anything and then brought out both Bruce Campbell (Ash) and director Sam Raimi. 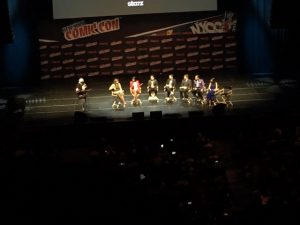 Raimi teased Campbell about the clip the actor planned to show asking if it would be the same as what they had showed in San Diego at the ComicCon there.  To the delight of the panel audience, which filled up an entire ballroom, the “clip” would be the entire first episode of the show.

The episode introduced new characters who would be Ash’s “right hand” so to speak. Ash works at ValueMart, well, if you want to call it “work” as his immature and lazy persona carries over into the new show and we find him still egotistical, sarcastic and womanizing, but charming.  His lifestyle leads him to read some poetry to a girl he’s brought home, unfortunately the poems are from the Necrenomicon, the book of the dead, which unleashes the evil dead. 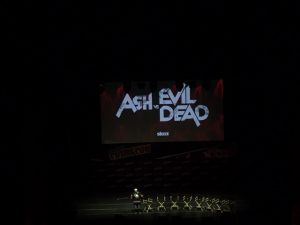 The first episode does a great job of integrating the old with the new, setting up a new storyline for the ongoing series and giving fans of the franchise exactly what they are looking for.  The episode that introduces detective Amanda Fisher, played by Jill Marie Jones, is both funny and horrifying.  There’s suspense that has you jumping out of your skin even while you can fairly-well predict what’s about to happen.  It’s a perfect blend of “expected surprises”, humor and gore.

Other actors include Dana DeLorenzo who pays the spunky Kelly Maxwell, one part of the three-person team, and Ray Santiago who plays Pablo Bolivar, a character who looks up to Ash and a character who proves to be the perfect sidekick.  Lucy Lawless, best known for Xena and Spartacus, plays the mysterious Ruby and of course our star Bruce Campbell has returned to reprise his role as Ash Williams.

The show is on the STARZ network giving the Ash vs Evil Dead show the freedom to be as lewd, crude and gory as it wanted, and the showrunner Craig DiGregorio takes full advantage.  Sex, gore, violence and inappropriateness abound.  All the things Evil Dead fans have grown to expect and love. 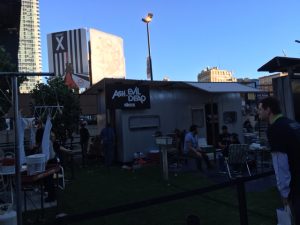 The show is a mix of Evil Dead, Evil Dead 2 and Army of Darkness, giving fans of that franchise the same experience that made it a cult classic, but it’s updated enough that it felt fresh and those new to the Evil Dead, those who love horror with comedy, dark comedy and laugh in the face of spurting gore will become quick fans of the television series.

Books you can read regarding the Evil Dead and Ash- 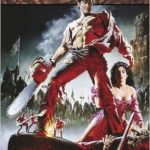 Readers Entertainmenthttp://dayagency.com
Previous articleSNEAK PEEK: A Prince of A Guy by Eileen Dreyer
Next articleNew York ComicCon 2015: A Recap