Sneak Peek: The Princess & The Pea by Eileen Dreyer 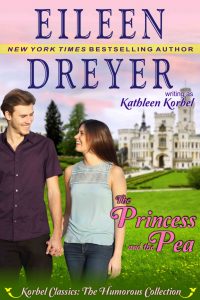 Moritanian Crown Princess Cassandra leads a fairy-tale existence. Some consider her the most spoiled woman in Europe. Then she is kidnapped.

Retired spy Paul Phillips is a self-made man more at home with flying bullets and fast cars than champagne and caviar. Then he finds Crown Princess Cassandra.

Now speeding through Europe, the pair are ducking enemies and each other. But as sparks fly, they wonder if they might be driving toward a fairy tale ending.

“You can’t steal just any car,” Paul said as they drove by yet another candidate.

It was dusk, the clouds deepening the gloom and a cold northerly wind whistling at the car windows. Quitting the little cabin at sundown, they’d been cruising the streets and restaurant parking lots in and around Garmisch-Partenkirchen for the better part of an hour trying to find a likely car to steal. The chances were that Paul’s car had already been identified, leaving them vulnerable at a crossing. In a new car, though, he still might get by with just flashing his passport.

“What difference does it make?” Cassandra asked, scanning the other side of the street. The car Paul had just turned down had been a Citroen, ugly but serviceable. “The speed?”

“The style. There are certain cars I wouldn’t be caught dead in.”

She stared at him. “Well, now that certainly makes sense. Just what car would you like to be caught dead in? It might come to that if we don’t stop fooling around.”

Cassandra was feeling better for the five hours’ sleep she’d managed that afternoon. For the first time in over two months, she’d felt safe in a bed. She’d been secure enough not even to dream. Paul had kept his vigil by the front window, claiming not to be tired. Cassandra realized that he was just watching out for problems. Shamelessly, she’d let him, and slept like a newborn beneath the delicious down comforter.

She shook her head, delighted. “And I’m the one with the difficult reputation. Right now, I’d settle for a horse-drawn cart.”

“You wouldn’t if you’d ever had to outdrive the competition on a mountain road,” he assured her with an unrepentant grin.

“But not with as much class. A man has a reputation to uphold.”

“Who did you work for before your government?” Cassandra asked. “A chop shop?”

Paul turned on her, surprised by her terminology.

“Contrary to popular belief,” Cassandra informed him archly, “the modern-day princess is quite well informed.”

She relented with a smile. “Only after the banking conferences are over.”

They’d pulled into the back of a small parking lot, away from the lights of a restaurant where dinner was most likely being served. In the corner, crouched like a nocturnal beast, sat a black Ferrari. It was wedged between a Volvo and an old model Peugeot.

“Aren’t you asking for trouble?” Cassandra demanded, instinctively liking the line of the expensive sports car. “The owner of that Ferrari is going to scream a lot louder about his car being missing than the Peugeot’s owner is.”

“We’ll only need it for a few hours.”

“And then we’ll give it right back?”

“Of course not. By then we’ll be in Switzerland. But we’ll leave it there safe and secure. I’ll even let the police know where to find it.”

“What about your car?” she asked. “How are you going to get it back?”

“I’ll leave it in the lot at the train station. Then in a couple of days, I’ll have a friend pick it up.”

“Friends? Yeah. And they all like fast cars. By the way, do you drive?”

Cassandra concealed a dry smile of triumph. “Oh, I get by.”

“Uncle Eric taught me on the Daimler.”

Paul rolled his eyes. A Daimler was a great car. It was not, however, a Porsche or Ferrari. “Do you think you could drive my car down to the train station and park it without running into anything?”

Cassandra nodded, now thoroughly enjoying herself. “I think so.”

He nodded, pulling to a stop before the Ferrari. “Okay. I’ll meet you there in ten minutes. Try not to get kidnapped again before I get there.”

Paul stepped out and handed over the driver’s seat to Cassandra. He was just about to lean back in the window to give a few final warnings, when she slid the car into reverse and backed to the end of the parking lot at about thirty miles an hour. Yanking on the emergency brake and spinning the wheel, she executed a perfect 180-degree turn and sped out onto the street, her taillights disappearing quickly down the mountainous road.

Back in the parking lot, Paul could only stare. “Well, I’ll be damned.”

You can purchase The Princess & The Pea at:

New York Times bestselling, RWA Hall of Fame author Eileen Dreyer has published 31 romance novels in most genres, 8 medical­forensic suspenses, and 10 short stories. 2015 sees Eileen enjoying critical acclaim for her foray into historical romance, the Drake’s Rakes series, which Eileen labels as Regency Romantic Adventure that follows a group of Regency aristocrats who are willing to sacrifice everything to keep their country safe. She is also working on her first non­fiction book, TRAVELS WITH DAVE, about a journey she’s been taking with a friend’s ashes.

A retired trauma nurse, Eileen lives in her native St. Louis with her husband, children, and large and noisy Irish family, of which she is the reluctant matriarch. She has animals but refuses to subject them to the limelight.

Rafflecopter Giveaway – Ebook copy of The Princess & The Pea