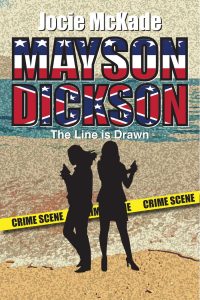 Mayson Dickson, The Line is Drawn by Jocie McKade
A funny, cozy mystery

What would you do if you received a letter requesting your presence at a law firm? Most of us would probably think, ‘wow, a rich relative passed away and left me millions‘ right? Okay, I would think that.

Now, imagine you go to this law firm and you are introduced to a person that looks eerily similar to you. As an only child, you blow that off to coincidence until that lawyer says: “You two are sisters, twin sisters, and your entire life has been a lie.”

Before everything can be explained the lawyer is slammed between the eyes with a bullet but not before leaving you with a cryptic message.

This newly acquired sister and you are given new names, new identities, and no answers. Thrust into a car that’s taking you to an unknown location, you discover this sister is a redneck, NASCAR loving, yee-hawing Southerner. Or, a snooty, Harvard graduate from Boston who doesn’t realize there is a letter ‘r’ in the English alphabet.

Yes, it was a long road trip!

Discovering a dead body, shows them they’ve got serious investigative skills, so they team up to start Mayson-Dickson Investigations. Not only are they solving some seriously nasty murders, but the PI firm is a great cover for trying to discover who their parents really were and how they ended up in some sort of government protection program.

Add to the mix a sexy beach bum caretaker, one hot FBI agent, a computer hacker in hiding and a city full of bad guys.

The South is on the rise and the North is marching right down the Mayson-Dickson line.

“What was that you said about being afraid?” Jackie whispered, nudging Emme’s hands off her shoulders. “I can’t shoot them if you don’t let go.”

Together they sneaked down one step at a time.

“Who is it? Can you see them?” Emme tapped her shoulder.

“Shh.” Stopping on the landing where the stairs turned, they spotted the shadow of someone make their way across the kitchen. The light from the refrigerator lit up the corner.

Jackie snapped the safety off, held the gun in perfect form in front of her and took two more steps down, Emme at her elbow.

“Stop right there,” she yelled in the loudest, grittiest voice she could muster.

“Whoa, whoa,” a man came into view, hands in the air. “Shit,” he ducked, jumping behind the kitchen island. “Is that a gun?”

“It is, dirt bag, and she knows how to use it.” Emme’s southern drawl just didn’t have the same powerful effect.

Shrugging, she patted her pockets. “It’s in the car,” she whispered.

“You don’t need to do that.” The man stood cautiously. “Don’t shoot. I’m not a burglar. I work for Moe Sheridan. He said to expect two guests here today and asked me to put groceries in the fridge for you.” His hands were still in the air as a smile crossed his face.

“Welcome, I’m Fender.” The man took off his baseball cap, smiling at them. He was about six foot two, slender and had the most amazing ocean blue eyes Jackie had ever seen. His brown hair was a little long and sun-streaked, the back grazing the collar of his t-shirt. “Please, put the gun down. I seriously don’t want to be shot.”

Emme pushed right past Jackie, heading down the stairs, smiling up at the man.

“Howdy, I’m Emme,” she hesitated, “Emme Mayson, and that’s Jackie Dickson.” Was she seriously introducing them to a potential burglar?

“I’m lowering the gun, but I’m not putting it away.” Jackie wanted to make sure the man knew she meant business.

“Gotcha.” He gave her a cautious smile.

“Your name is Fender, Fender what?” Emme asked, sliding her butt onto one of the barstools.

“Like the car part?” She walked behind the bar, gun still in her hand.

“Like the guitar.” He nodded toward the door. “I have more groceries in the Jeep. If you promise not to shoot me, I’ll bring them in.” Not waiting for an answer, he gave Jackie a wink and headed out the door.

“What the hell? Do you always think with your libido?” Jackie ripped into Emme. “’Howdy, partner,’ she mocked her southern drawl, “’we’re Emme and Jackie.’ You don’t know this guy from a tree.”

Emme slipped off the bar stool, walking slowly toward her. “What was your plan? Hold him at gunpoint all night? He knew us, he knew Moe Sheridan and that is not a name you pull out of a hat,” she pointed at the door. “Plus, he had a key.”

You can purchase Mayson Dickson at:
Amazon
Smashwords (multiple formats)

Jocie McKade is an award winning, Amazon bestselling author of romantic comedies and humorous mysteries.  She is also a scriptwriter, and journalist. Jocie lives in the Midwest on Dust Bunny Farm with her family and Diesel the Wonder Dog. When not writing, she grows ArnoldSwartzaWeeds in her garden, and camps whenever the opportunity presents itself.