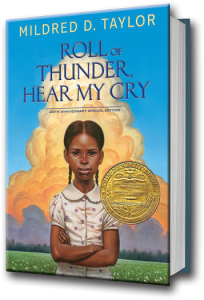 A newly formed partnership between Penguin Young Readers and We Need Diverse books is sponsoring a writing contest. To commemorate the 40th anniversary of Roll of Thunder, Hear My Cry by Mildred D. Taylor. In a newly released edition of the Newbery Medal winning book, the author has added new content, a new foreword by Jacqueline Woodson and updated illustrations from Kadir Nelson.

From the press release: “Ethnically diverse writers can submit in their middle grade stories (for readers ages 8 to 14) beginning in April 2016. In 1974, the Council on Interracial Books sponsored a writing contest seeking out diverse voices. Mildred D. Taylor was the winner of the African-American segment for the manuscript that became Song of the Trees (Dial, 1975), her first book. It introduced the Logan family and was followed by Roll of Thunder, Hear My Cry (1976), which won the Newbery Medal.”

Entry information and additional details can be found on their website.