When a man loves a woman

Recovering addict Nick Dorsey finds solace in his regimented life. That is until he meets Shyla Metha.  Something about the shy Indian beauty who delivers take-out to his Greenwich Village loft inspires the reclusive writer. And when Shyla reveals her desire to write a book of her own, he agrees to help her. The tale of a young Indian girl growing up against a landscape of brutal choices isn’t Nick’s usual territory, but something about the story, and the beautiful storyteller, draws him in deep.

Shyla is drawn to Nick, but she never imagines falling for him. Like Nick, Shyla hails from a village, too…a rural village in India. They have nothing in common, yet he makes her feel alive for the first time in her life. She is not ready for their journey to end, but the plans she’s made cannot be broken…not even by him. Can they find a way to rewrite the next chapter?

“This smoothly written cross-cultural romance, which initially appears uncomplicated, evolves into an in-depth study of strong emotions and underlying motivations. Schiller has a fine talent for describing cultural conflicts, and the characters are multifaceted and endearing. A truly unanticipated turn of events sends the riveting conclusion into overdrive, leaving readers breathless.” – Publisher’s Weekly

She shrugged. “The writing’s good, but I didn’t care for the characters.”

“They felt one-dimensional. He comes across as a womanizing, self-indulgent fool.”

Nick arched his brow, his lips quirking into a grin. “He’s got his faults, but I wouldn’t describe him that way.”

“As bad as he was, though, the heroine was even worse. She seemed stupid and fake…almost vapid. She was always getting herself into trouble and falling into hot water.” Encouraged by his amused smile, she continued, “And I refer to hot water in the literal sense. The one I read, the girl was suspended from the ceiling over a pot of boiling water until Max Montero swooped in at the last minute.”

“It was acid, and he likes saving beautiful women from danger. What’s wrong with that?”

“She could have saved herself, or better yet, not gotten into the situation. And he…well, he could have been nicer to her in general.”

“Not every hero comes in a one-size-fits-all package, Shyla. Don’t hold back, though. Tell me what you really think.”

“Okay, I will. I can appreciate a different kind of hero, but I’d like one with a functioning set of scruples. In the scheme of things, these books don’t deserve shelf space with the others. They definitely fall into the dime store drivel category.” 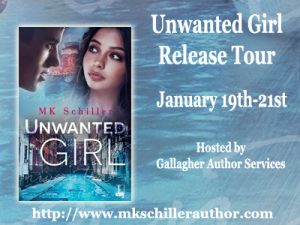 “Ouch,” Nick said, pouring himself another drink. “I don’t think you understand the concept of sarcasm.”

She opened and shut her mouth as the realization hit her. “You were joking when you asked me to tell you what I really thought?”

“So, what do you do for a living?” she asked, anxious to change the subject. It was possible she’d accidently insulted one of his favorite novelists.

You can purchase An Unwanted Girl at:
Amazon

I am a hopeless romantic in a hopelessly pragmatic world. I have a full time life and two busy teenagers, but in the dark of night, I sit by the warm glow of my computer monitor, and attempt to conjure up passionate heartwarming stories with plenty of humor.

I started imagining stories in my head at a very young age. In fact, I got so good at it that friends asked me to create plots featuring them as the heroine and the object of their affection as the hero. We’d spend hours on the phone while I came up with a series of unrealistic, yet tender events, which led to a satisfying conclusion. You’ve heard of fan fiction… this was friend fiction.

Even with that, it took many years to realize I could produce an actual full-length book that readers would enjoy. I try to make my stories humorous, realistic, with flawed but redeeming characters. I hope you enjoy my stories and always find The Happily Ever After in every endeavor.