BEHIND THE WORDS: An Interview with Bestselling Author HILDIE MCQUEEN

Reader’s Entertainment welcomes multi-published author Hildie McQueen. She writes across the spectrum, and her two latest an historical and a military romance are sure to please readers.

Judith Hamilton arrives in Casper, Wyoming to find the man she is to marry has died. When offered a position as a caregiver to the town blacksmith’s child, she quickly accepts, only to find the offer includes marrying the father.

Sean Montgomery can’t believe the answer to his prayers arrives so unexpectedly. That he has to marry the beautiful woman is not much of a sacrifice.

A wonderful story that will delight you.

Military vet Adam Ford returns to his hometown a damaged hero—the war stole his best friend and left him with severe PTSD. Every day is a challenge as he struggles to reconstruct his life. When a tempting beauty moves in next door, Adam’s world is turned upside down and he doesn’t appreciate it.

After losing the love of her life in Iraq, Tesha Washington runs away from everything she’s ever known and escapes to a small town where she takes on the challenges of restoring an old Victorian house. Out of options, she turns to her reclusive neighbor for help.

As Tesha slowly draws Adam out of the shell that used to be a man, she also learns there really is such a thing as starting over. Together they discover the healing power of love and a bond to last a lifetime.

Welcome Hildie, tell us a bit about yourself. Where you’re from, where you live? Do you have one of those day-jobs?

Hello! Thank you so much for allowing me to introduce myself here.  I am originally from the Baja Peninsula (Mexico).  I grew up on both sides of the border, Tijuana, Baja California and San Diego, California.  After moving around with the military, I settled in Georgia.  Love it here.  Thank God, I write full time.  It’s my dream job!

Seriously committed, since 2009.  I was first published in September of 2011.

I write for three or four hours a day.  My usual goal is 3,000 words, but most days I peter out at about 2,500.  I call that a successful day.  I write in the morning from about ten til about one in the afternoon, sometimes two.  Then I take a break, do some household things.  Then I come back to the computer and work for another three or four hours on administrative stuff and updating social media.  If I have a storyline blaring in my head, then I may write for another hour in the evening.

Judith, Bride of Wyoming. I am super excited about this book.  It was actually released on January 1st, but it’s such a great story I love talking about it and I’m thrilled to share it.

What makes this book so great is that it’s part of a fifty, yes I said 5-0 book compilation, where each author wrote a different bride story for each state in the order they became part of the United States.  The American Mail Order Brides is an amazing project.

I borrow a lot from real life.  Obviously with mail order brides or any historical, I will read some historical event and imagine a story derived from it.

For the mail order brides book Judith, Bride of Wyoming, the set up to someone else started the storyline for everyone to use a fire in a factory in Massachusetts.

I decided my bride would travel all the way across the country to meet her future husband only to find he’d died.  So what would happen next?  What would she do?  It was an interesting story to write and I’m glad to say, Judith is one of my favorite heroines.  She’s feisty and very strong.

At first, Judith was going to marry the dead man’s brother.  He would be the one to pick her up at the train station and break the news to her.  It didn’t work out.  The hero turned out to be the town’s blacksmith, a single father that stole my heart.

Adam Ford, the hero in one of my contemporary books, Even Heroes Cry, without a doubt.  I used the experiences of the soldiers and civilians, I worked with that went to war and came back totally different.  This hero gets a happily ever after, but he does not get miraculously cured.

It was a hard book to write, but it’s probably my favorite.

A Christmas story, Blue Montana Christmas, to close out my Shades of Blue series and I’m working on a new series, it’s also Historical Western, can’t divulge anything about it yet, but I am excited about it.

Yes, I love to read authors whose book draw you into their world and turn into a vision. I can’t put books down by Kristan Higgins, she has quite a gift.  I think the author that inspired me the most was J.R. Ward, talk about fascinating writing!

No contest, I’d love to spend the day with J.R. Ward.  I’d be a drooling, blabbering mess.

Not that I know of.  Darn I wish I could tap dance or something.

I love Scotch with a splash of water and one ice cube.  My comfort food is probably pasta with nothing but butter and seasoned salt.

What my perfect writing place would be if I could get away for a week.  It would be in a cottage by the ocean or a loch in Scotland by the way.

We are so glad to have you drop by Hildie!!

You can purchase her latest titles at: 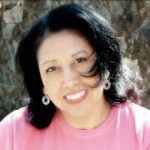 Bestselling author Hildie McQueen loves entering unusual situations and getting into interesting adventures, which is what her characters do as well. She writes romance because she is in love with love! Author of Romance in Highland historical, Western Historical and contemporary, she writes something every reader can enjoy.

Most days she can be found in her pajamas hiding from deliverymen while drinking tea from her David Gandy coffee mug. In the afternoons she browses the Internet for semi-nude men to post on Facebook.