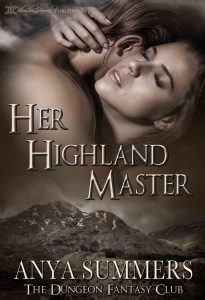 Her Highland Master by Anya Summers

Zoey Mills’s life is in shambles. She’s been accused of leaking her upper crust Hollywood clients’ data to an online magazine for a large payday. After a wine and chocolate-filled evening of drowning her sorrows, she determines that her best course of action is to leave her home in sunny Los Angeles for a week-long vacation in the Scottish Highlands. It’s the only way she can escape from the fact that her image is being splashed across the nightly news – and it might actually give her a chance to consider what her next move should be, now that her Great Master Life Plan has disintegrated into dust.

Unfortunately, she’s only just landed and is navigating the tiny roads in her rental car when a freak early autumn snow storm hits. Zoey finds herself stranded and winds up on the doorstep of Mullardoch Manor; home of the sexy Scotsman, Declan McDougal, who is her every dark fantasy brought to life.

Declan is one of the founding members of The Dungeon Fantasy Club. As a billionaire businessman and a Dom, he prefers to keep his sexual preferences and tastes away from the boardroom. He’s also become bored, not just with the club, but also with his life. None of the subs he meets can hold his interest for more than a night and it’s been that way for a long time. He just never wants more than a brief encounter. At least, not since his ex-fiancée cheated on him with another Dom and ran away. However, that all changes when Zoey barrels into his home uninvited and upends his luxurious but stale existence.

When Zoey finds herself without a place to stay, Declan makes her a tantalizing but scandalous offer: Stay in his home for the week, free of charge, and spend each night warming his bed. Or any other time of the day, for that matter. Deciding she doesn’t have much to lose and possibly everything to gain, Zoey accepts.

With Zoey’s every sweet subsequent cry of ecstasy, Declan uncovers a sub who warms not only his bed, but slowly thaws his frozen, scarred heart. And as Zoey explores her deepest fantasies, even as he spanks her bare bottom for disobeying his rules, she finds herself wanting more than just a week of unmitigated pleasure with the Dom.

Things seem to be progressing perfectly, both in bed and out, when Zoey’s past catches up with her. When he feels betrayed once more, and fears the woman he has grown to care for is not who she says she is, will Declan still be willing to risk his heart to become Her Highland Master?

Could this day really get any worse? She knew even thinking that was akin to the kiss of doom and practically begging the universe for more calamity. Snow blanketed her black pea coat. It soaked the pretty blue hat that she’d purchased at her favorite shop on the Magnolia strip in Burbank. White slush covered her jeans, wetness seeped in, freezing her lower extremities, and buried her black boots. She was a mess. Between the wind and the wet snow, every part of her body was chilled to the bone by the time she stood next to her rental car, rubbing her throbbing tailbone. The car was a disaster. The trunk door was propped open, waving in the wind, allowing all the snow inside. Her luggage would be ruined. Not to mention that she could kiss her deposit on the rental goodbye. Even the extra insurance she’d purchased might not cover all the damage she was sure there would be.

She glanced at the furious sky, certain she would find some mythical fairy, or god who had made her a target for destruction. What the hell was she supposed to do now?

After trying to get a signal on her phone again for a few of the longest and coldest minutes of her life, Zoey tossed the useless piece of equipment into an outside pocket in her purse. She strode further onto the winding road, looking up at the manor home. Surely someone would be there, and would let her use a phone to call a tow truck. Maybe let her wait by a warm fireplace with a hot cup of tea. The thought of anything hot and warm made her groan. She wanted that tea, dammit.

Trudging through the snow, she hastened as fast as her feet would carry her. If it weren’t for all the snow and ice on the slick roads, deepening by the minute, she would have run. As it was, her all-weather boots were not living up to their name as she wiped out for a third time in the snow. Snow had leaked under her coat, her hat and hair were a sopping mess, and she could no longer feel her thighs.

Her teeth were chattering by the time she stumbled through the—thankfully—open black gate to the manor. Beyond the gate entrance, the small road opened to a circular drive with a stone fountain in the center. She strode around it, awed by the manor up close, which looked more like an estate really. Ashen stone walls towered three stories up, with gilded windows and turrets. It was a place straight out of a storybook fantasy. Well, except for the hellish storm. That she could do without, she thought, as another gust of frigid air blasted her senses and her body went numb. She shuffled around the courtyard faster, hurrying for what had to be the front door. This place made her think of dashing lords, heroic men in kilts à la Robert the Bruce, and she could easily envision a celebrity or a titled lord emerging from the front door.

The first traces of apprehension swept over her now that she stood near hopeful salvation. The door was a heavy scrolled oak number, with a huge brass knocker in the form of a crest with three stars on a shield, and above it a knight’s helm with a stag’s head, which her befuddled brain didn’t recognize.

Holding the image of that roaring fire and hot tea in her mind, she alighted the dark stone stairs. She seized the brass knocker, her fingers all but frozen inside her gloves, and knocked on the heavy door. After a few minutes with no response, Zoey started banging incessantly against the wood using both her fist and the knocker.

“Hello,” she cried, as the wind kicked up and swept the sound from her. Not that anyone heard her as the wind howled with a ferocity that made her wonder if it would pick her up and sweep her to Oz. When no one answered as she stood there shivering, searching for a doorbell, colder than she had ever been in her life, she grew impatient, frustrated that the dreamt about hospitality wasn’t forthcoming. She finally spied a doorbell, coated with snow. Her body trembled so fiercely that her arm shook as she pressed the bell, and then she did something she normally would never do. She tried the door handle and when it turned with an audible groan, she opened the door to another person’s home and stepped inside. Closing the door behind her, she whimpered.

You can purchase Her Highland Master at:
AMAZON
Blushing Books

Anya is a Bestselling and Award-Winning Author published in multiple fiction genres. She also writes urban fantasy and paranormal romance under the name, Maggie Mae Gallagher. A total geek at her core, when she is not writing, she adores attending the latest comic con or spending time with her family. She currently lives in the midwest with her two furry felines.

You can learn more about Anya and her books online at: