Behind the Words: Welcomes Sadie & Sophie Cuffe Authors of Take A Peak 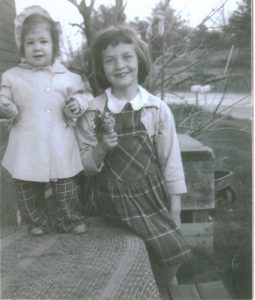 Welcome to Reader’s Entertainment ladies, I’m excited to have you here today. So, tell us a bit about yourself. Where you’re from, where you live? Do you have one of those day-jobs?

We’re Sadie & Sophie Cuffe, real-life sisters and writing partners. Like salt & pepper, or cereal & milk, we can live and write without each other, but we like to think we’re better when consumed together. We’re born and raised in rural Maine and currently live in downeast where the sunrise first touches the US shore. Our day job isn’t exactly a 9-5er but we do operate a small farm and we also work for the church in youth, senior, music, worship ministries, and in administrative tasks.

Since the mid 1980’s. We’re not exactly overnight successes, but we’ve learned a lot along the way and have enjoyed the detours. The great thing about writing is, we always feel like the best is yet to come.
Briefly describe your writing day.

We get the milking and barn chores out of the way first. Then we have our personal Bible reading/prayer time before we hang out in the office. This gets our hearts and heads straightened out, an impossible job for anyone but God. We write back-to-back (to avoid screen and other distractions), sometimes we take a mid-morning jump-around exercise break and/or a chocolate milk/yogurt break. Ideally we write or do writing-related work for about 3-3½  hours before lunch. After lunch we try to get in another 2-3 hours, depending on the season of the year. (In spring and summer, our schedule involves more outdoor time fencing, haying, gardening, etc.) And we sometimes squeeze in an hour or two at night; and we do actually talk to each other and brainstorm or do head banging.
Tell us about your latest release?

It’s called TAKE A PEAK, and is part of Forget-Me-Not Romances’ Love’s Sporting Chance Collection. It’s a novella, so it’s a quick, fun read, sort of like a beach read only instead of the shore it’ll transport the reader to a mountain escape. The hero is a widower and photographer (Sophie’s favorite), and the heroine has wandered from her faith. They get thrown together in an all-out race to be the first team to Icarus Peak. Along the way they encounter an ex and his jealous new girlfriend, nature’s obstacles, and their own resistance to change. Share the humor, hear the wind in the trees, the waterfalls, the birds, and smell the mountain air: it’s like taking a hike without leaving the couch.

Are your characters entirely fictitious, or have you borrowed from real world people you know?

They’re entirely fictitious but, realistically, fiction mirrors real life experiences so there are threads of our life impressions woven into the imagination process.

We love to hike and camp, so we generally write what we know. When our editor gave us the opportunity to write for the Love’s Sporting Chance Collection, we brainstormed about what sort of athletic competition would combine well with adventure, faith, and romance, and took to the mountains.
Would you share one detail from your current release with readers that they might not find in the book?

In a real life hiking experience, we backpacked Katahdin. When we got to the top of Baxter Peak it was cold and gray, no one around but us, until a group of scruffy hikers burst on the scene from an adjacent trail. They’d just completed a six-month trek on the Appalachian Trail and wanted their picture taken on the peak. We got the camera ready, they lined up, turned and mooned us. They’d written in black marker on their backside cheeks and spelled out T-H-E-E-N-D. Truth is stranger than fiction. It’s an odd story and we couldn’t make even a fictionalized account work in the novella, but it’s something we’ll never forget.

Susanna Jacobs from A WOMAN LIKE ME. Her story is more raw women’s fiction than the other Cuffe sister books, and involves heart-breaking, can’t-get-over-it experiences. It’s every woman’s story and doesn’t pull any punches.
If you could be one of your characters for a day which character would it be? Why?

Sadie: Lydia Wainwright (from THE HEART KNOWS) because she’s about the right age, she lives in 1870’s Kansas (a time  and place we’d like to experience), she rides horses better than I do, she’s got a sarcastic sense of humor, and she’s got the guts to live life on her own terms with no fear.

Sophie: Carrie Allen (from MAINE’S WHITE PINE CONE CONSPIRACY) because she’s feisty, knows her way around a farm, can handle a gun, and makes great donuts.
What are you working on now?

We’re currently working on two inspirational romance novels: one contemporary suspense, one historical. LONG ROAD HOME is the story of a prodigal heroine who reappears in the life of her daughter and her daughter’s dad after seventeen years. She comes under false pretenses, but discovers the pull of a life and a home she never thought she wanted. It’s messy and it’ll rip your heart out. THE GOLDEN SPOON is set in the California gold rush and involves a jilted heroine and a starched-shirt tent meeting preacher.
We all know how important it is for writers to read. Are there any particular authors that have influenced how you write and, if so, how have they influenced you?
We both liked Madeleine Brent (and were surprised to discover it’s the penname of Peter O’Donnell) Brent’s heroines were not the stereotypical pretty girls; instead they were resourceful, smart, interesting, but not perfect; and they refused to wilt in the face of romance or danger. Brent’s books were that beautiful combination of women’s fiction, adventure, and heart. We like to think our heroines are following in their footsteps yet bringing their own Cuffe sister character to the page.
If you could have dinner with any writer living or dead, who would it be and why?

That’s a tough one, but right now it would be our paternal grandfather (and our Dad could come along, too. He never wrote fiction but he wrote his story on our hearts and he wrote incredible sermons and songs.) Our grandfather died when we were teens and he left behind a volume of words written in the margins of magazines and newspapers, interesting twists and turns, but no one took the time to discover what he had to say. That’s why we’d like to hear his side of the story and see if we carry some of those same words and passions in our hearts.

Sadie: I can walk backwards as fast as I can walk forward, and I make a good snow angel even when wearing snowshoes (not real talented or surprising, but getting up in snowshoes is harder than you think!)

Sophie: I can still play the accordion I got when I was ten (hopefully better now, though), and I’m working on mastering Dad’s banjo ukulele.
Your favorite go to drink or food when the world goes crazy!

Sadie: Any kind of crackers and a chocolate milk shake.

Sophie: Any kind of chips and a chocolate milk shake… and chocolate chip cookies.
What is the one question you never get asked at interviews, but wish you did? Ask and answer it.

What is your dream project? Today our dream is to write the best cry-your-eyes-out movie ever (and the quintessential theme song to go with it) and have Sophie and country music legends star in it. (Hey, we said it’s a dream!) But tomorrow our answer to that same question might be, design a cobblestone courtyard, bordered with a stone wall and splashed with herb gardens and topiary.

Thanks so much for letting us hang out with you!

Thank you ladies for sharing a little look Behind the Words with our readers!!

Take a Peak:
They say life’s a journey — peaks and valleys, sunshine and shadow. What they don’t tell you is the climb never ends; there’s always another step, another trail, another peak.

Darby Irish isn’t so sure of that. Her ex has moved on to someone new, a prettier (of course) and more petite (ugh) blond, and given Darby her walking papers on romance and her job. The problem is, she doesn’t know where to walk after five years of career and relationship stagnation.

Keaton Atticus Cooper knows all about the never-ending climb. He’s been running down every trail and up every mountain trying to outdistance the pain in his heart, but everywhere he goes, everything he sees only plunges the knife deeper and reminds him of the wife he lost to cancer.

When mutual friends, Garrett and Bonnie, recruit these two wandering souls to join them in a head-to-head challenge with another four-person team to out-hike their opponents and be the first to Take A Peak, it’s an all-out scramble of broken hearts and bragging rights.

Who would’ve believed Darby’s ex and his new girlfriend would stack up against them on the other team? Or that Keaton would discover his greatest opponent is his own heart, and his biggest challenge is clinging to his wife’s memory and not falling for Darby? It’s a race that tests the heart and faith. Who will make it to the peak first?

You can purchase Take a Peek at:
Amazon

About the Authors:
In addition to freelance writing, the Cuffe sisters run a small farm in downeast  Maine’s Unorganized Territory.  They bring Jane-of-all-trades life experiences to their work, and believe God gave them this background to write squarely to the heart of real women who don’t always wear a size two, and who prefer boots and flannel to high heels and the lbd. They believe with God anything is possible; and that some of the best stories aren’t hatched in creative writing class, they’re composed on the seat of a tractor.
Learn more about the Cuffe sisters and their books at:
Facebook author page: http://tinyurl.com/9cflp7w
books: www.cuffesisters.com/cuffe-works/
blog: www.cuffesisters.com/off-the-cuffe/