After his wife of 54 years died in 2006, Chuck Swartwout decided there had to be more to life than merely the time spent on earth.
This realization motivated him to take a long analytical look at the afterlife, which he believes we will all enter after death. Using his training in the scientific method, Swartwout researched and published You Don’t Die – You Just Change Channels! which he describes as a ‘common sense’ approach to prove the existence of an afterlife.
http://www.chuckswartwout.com/ 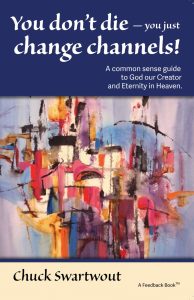 Readers Entertainmenthttp://dayagency.com
Previous articleSNEAK PEEK: May Day Olivia Dade
Next articleBook Trailer Feature: All the Birds in the Sky by Charlie Jane Anders