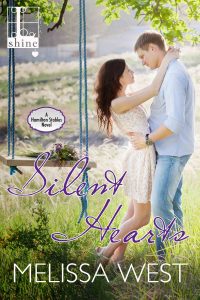 The Hamilton brothers have horse racing in their blood, and their sprawling Kentucky farm is the family’s pride and joy. But they’ve got plenty of passion to spare…

Nick Hamilton has always known he’d take the reins of the family business when his father died, but that doesn’t make it any easier when the time comes. Especially with his two siblings tempted by a shrewd offer from a huge corporation to buy Hamilton Industries. Needing advice, Nick turns to his sensible childhood friend, Becca Stark—and finds her suddenly grown-up beauty ignites brand-new confusion, and crystal clear desire…

Becca has loved Nick for as far back as she can remember, but she decided long ago that telling him would be a mistake. Stubborn, strong Nick doesn’t see her as anything but the tomboy she used to be—or does he? As she helps him untangle his feelings about the ranch’s future, the familiar bond between them heats into an explosive attraction—and the kind of love that just might take the lead…

“What are you doing here?” Becca asked.

“I had something important to tell you.”

The beer bottle slipped from her grasp, shattering, but she couldn’t pull her gaze from his.  “What did you just say?” 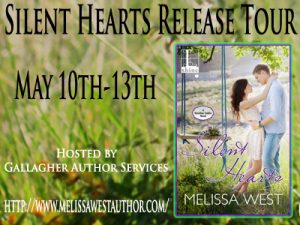 Pushing off the swing and tiptoeing around the broken glass so she could see him better, she asked, “But what about our friendship?”

Nick edged closer to her, one step, but the impact on her heart was the weight of a thousand. It felt like they’d been walking toward each other for a lifetime, only to finally find the right route, the right location, the right way to each other.

Tentatively, he reached for her hand, his gaze trained on their linked fingers as though he were watching something miraculous happening. “I don’t know.” Then he flicked his eyes up to hers. “But if I don’t do this, I’m going to go insane.”

And then in one more move, he had her in his arms, his face coming down to meet hers as he captured her lips with his…

You can purchase Silent Heart or any of Melissa’s books at:
Amazon 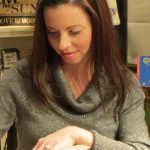 Melissa West writes heartfelt Southern romance and teen sci-fi romance, all with lots of kissing. Because who doesn’t like kissing? She lives outside of Atlanta, GA with her husband and two daughters and spends most of her time writing, reading, or fueling her coffee addiction.