Behind The Words: Author Julie Moffett 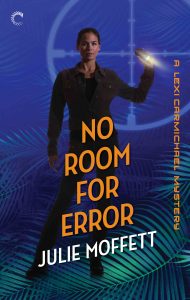 The week Behind the Words welcomes bestselling mystery author Julie Moffett. We are glad to have you drop by Julie.

Let’s begin with where you’re from, where you live? Do you have one of those day-jobs?

Hi, I’m Julie Moffett and I’m a military brat (Air Force) so I’ve lived all over the world. These days, I live in northern Virginia, about 30 minutes from Washington, DC. Yes, I have a day job writing federal and commercial proposals for a defense contractor.

I’ve been writing books since the second grade. My first novel was a love story between Prince Valen and Princess Tina who met, fell in love and got married on Valentine’s Day. It was a hit with all the girls in my class. The boys held their noses. After that I won a 3rd grade poem contest about a haunted house, followed by a stint on my college newspaper, and later I moved into international journalism. Eventually I got brave enough to pen a novel. My first novel, FLEETING SPLENDOR, a Scottish historical love triangle, came out in 1993. NO STRINGS ATTACHED, the 8th book in my geeky Lexi Carmichael mystery series, comes out on July 4th and will be my 17th published novel.

Writing usually starts when my youngest is asleep. I write a lot on the weekends and at soccer practices and on napkins or whenever or wherever I can!

NO STRINGS ATTACHED, the 8th book in my geeky Lexi Carmichael mystery series, comes out on July 4th. Happy Independence Day to me! J

My entire family is geeky, so I have rich material to draw on. Seriously, everyone one I know is at risk of appearing in my novels in one way or the other. No one is safe. Everyone who knows me, even remotely, is in danger of appearing in my novel. That being said, the characters encompass a lot of traits from many different people, myself included.

For my mystery series, I decided to feature a hero the opposite of a James Bond character. So, I created an antithesis character—female, geeky, not at all fashionable, socially awkward, and has to save the day with her brain as opposed to her stellar good looks and charm. From that, Lexi Carmichael, geek extraordinaire, was born. I did, however, make her a Bond geek, which makes for a lot of fun laughs, and some of the titles are twists on Bond themes.

My current release, NO ROOM FOR ERROR (out last December), involves a plane crash in the jungle of Papua New Guinea. At the time, my nephew’s girlfriend was actually in the country, working as a physical therapist for an Olympic group of athletes. She sent me some cool artifacts that I have hanging in my office.

I think the answer is Lexi Carmichael. She’s such a conundrum. She’s smart enough to know she needs people and a life outside her “virtual existence,” but she doesn’t know quite how to go about it. Enter her best friend, Basia, who is essentially the expositional character in the series. She plays off Lexi’s inexperience and offers suggestions to help bring her out of her geek shell with sometimes (well, most of the time) unexpected results. 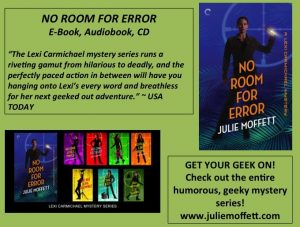 I think the answer would be Slash, the hot Italian-American secret agent in the Lexi Carmichael series, because how fun would that be?!? J

Oops, I did it again…

Leave it to me, Lexi Carmichael, to become a target for an elite organization of cyber criminals simply by being in the wrong place at the right time. As if I weren’t already freaking out about planning my best friend’s bachelorette party, I now have to keep my eyes peeled for people trying to kill me.

After accidentally intercepting a dangerous hack into the NSA and discovering the involvement of a foreign country in said hack, things begin to get seriously complicated. Diplomats, danger and spies, oh, my!

With Slash and my loyal friends by my side, I’m in a race against time to stop a team of sophisticated hackers on a deadly mission. My team of geeks is brilliant…but derailing an international plot for revenge will take everything we’ve got.

Don’t miss Lexi’s first adventure in No One Lives Twice!

I am a voracious reader across all genres. Those authors influenced me by making me love reading so much it made me want to write my own books. I love Mary Stewart, Victoria Holt, Michael Crichton, Robert Ludlum, John Le Carre, Robert Crais, Dean Koontz, Stephen King, Tess Gerritsen and Nora Roberts/JD Robb, among a thousand others. I adored Nancy Drew and the Hardy Boys books as a kid. But my favorite book of all time: Watership Down by Richard Adams. The rabbit fantasy thing just does it for me every time.

Mark Twain because he is just so cool.

I’m pretty good with foreign languages. I majored in Russian in college and graduate school and spent a year at the University of Warsaw in Poland taking all of my classes in Polish (except for my Russian language classes).  J

Popcorn! All flavors except the super spicy ones.

Q: If you could visit any time and place, where and when would it be and why?
A:  Egypt as the pyramids were being built. Then I could know for sure if they were engineered by aliens or not.  J

Thanks so much, Julie oxox

Here’s where you can pick up your copy of No Room For Error: 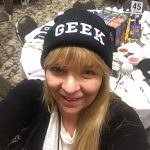 More about Julie and her books can be found online at: