Behind the Words with Holly Jacobs 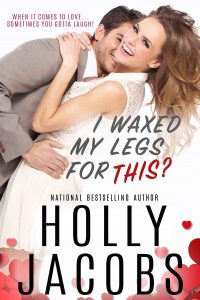 Welcome Holly, I’m very excited to have you here on Reader’s Entertainment.

First, tell us a bit about yourself. Where you’re from, where you live? Do you have one of those day-jobs?
~Hi, I’m Holly Jacobs.  I live in Erie, Pennsylvania and set most of my books in and around here.  What?  You mean Erie isn’t the first city that comes to mind when you think of romantic destinations?  It should be.  Our beaches on Presque Isle were just ranked the best freshwater beaches in USA Today’s poll.  (http://www.10best.com/awards/travel/best-freshwater-beach/) It’s a small town with big city amenities.  And we’re within a three hour or less drive to Cleveland, Buffalo, Pittsburgh and Toronto.  My day job is writing.  Which means I can go to work in holey jeans…which is good since that’s what my wardrobe mainly consists of.

How long have you been writing?
~I’ve been writing for more than fifteen years now.  To be honest, it doesn’t seem like that long.  You know the old saying about time flying when you’re having fun? It’s true for me.

Briefly describe your writing day.
~I live with a quiet rhythm.  I get up at about five, answer emails and do online stuff as I drink coffee.  Then it’s breakfast and a walk, after which I get to work.  I work until lunch, after which normally go back to work until my husband gets home from work.

Tell us about your latest release?
~It’s been such a busy spring!  I had a short story anthology—Short Stories for the Overworked and Under-Read—then an older book was released as an eBook—A Day Late and a Bride Short—then two novellas—Able to Love Again and A Simple Heart—and in June another older book is being released as an eBook for the first time—I Waxed My Legs for This?  It was my first sale to Harlequin and though it was one of my earliest works, I laughed as I read back through it.

Carrie has a few small problems.
1. She’s just broken up with her fettuccini-ordering boyfriend.
2. Her legs are covered in wax and it hurts too much to rip it off herself.
3. And maybe, just maybe, she’s a bit in love with her best friend who never orders fettuccini and rides to the rescue when she needs someone to tear the wax off her legs.

Ever since Jack saved Carrie’s life in school by giving her mouth-to-mouth, he’s ridden to her rescue time after time. When she confesses that his resuscitation was her first kiss, he decides to show her what a real kiss looks like…and maybe what true love looks like as well!

Are your characters entirely fictitious or have you borrowed from real world people you know?
~My characters are fictional in the truest sense, but to me they’re very, very real.  One of the biggest compliments I get as a writer is when someone tells me that my characters seemed real to them, too!

Where did you get the idea from?
~Ideas are…everywhere.  I’ll hear a song and think, Wow, what if…?  I guess that question, What if…? Is really the start of every book I’ve ever written.

Would you share one detail from your current release with readers that they might not find in the book?
~When I wrote I Waxed My Legs for This? I’d had a few sales of short stories, and a couple books to Kensington’s Precious Gem line.  But I wanted to write for Harlequin Duets, their comedy line.  But after a couple years of trying, I said to my husband maybe it was time to look for a real job.  He said, no.  He’d supported the family while the kids were young, he could handle some more time while I kept trying.  Then he told me he was sure Harlequin would call soon.  That was January of 2000.  Harlequin called in March. Silhouette Romance called in June and…well, I’ve been writing ever since.  And my husband still occasionally reminds me that he told me so!  LOL

Who has been the most difficult character for you to write? (Any of your books)
~I wrote The House on Briar Hill Road after we lost my mother-in-law to breast cancer.  The story was my catharsis.  It’s fictional, but so much of that pain of losing my MIL is wrapped up in it.  The character with breast cancer in the story was probably the most difficult to write for me.

If you could be one of your characters for a day which character would it be? Why?
~To be honest, I love all my characters and would like to invite them all over for a big party!  (Picking one—a favorite—is like trying to pick a favorite kid.)

What are you working on now?
~I’m working on another Women’s Fiction/Romance write now.  I’m enjoying going back and forth from romcoms to more serious stories. I made myself cry earlier today as I reread a scene…so it’s good this wasn’t a comedy! LOL

We all know how important it is for writers to read. Are there any particular authors that have influenced how you write and, if so, how have they influenced you?
~To be honest, when I’m working, I prefer nonfiction to fiction.  I read the paper this morning and frankly, the news can be so crazy and stark that it probably influences me to make sure I set my stories in realistic, but very hopeful settings.

If you could have dinner with any writer living or dead, who would it be and why?
~I’d probably pick JRR Tolkien.  I read The Hobbit for the first time in 3rd grade.  I’m not sure how much I understood, but I do know I reread it over and over in grade school.  And then went on to read the trilogy.  I remember that I read the scene where Gandalph died while I was on the school bus.  I really fought back the tears.  In many ways, Tolkien helped raise me and shape me.  I’ve always felt a kinship to Sam.  I try to look at the bright side and really revel in my simple, quiet life.  So yes, Tolkien.

Do you have a secret talent readers would be surprised by?
~I weave baskets.  My May release, A Simple Heart, has a heroine who weaves them.  You can see some of them here…https://www.pinterest.com/hollyjacobs1/baskets-by-holly-jacobs/

Your favorite go to drink or food when the world goes crazy!
~I’m just back from Ireland, so I’d have to say Guinness!  LOL  When I wrote Just One Thing, Guinness figured very heavily into the romance of it!  I keep hoping the company calls me to be their spokeswoman.  Alas they haven’t…yet.

What is the one question you never get ask at interviews, but wish you did? Ask and answer it.
~If you could have any other career, what would it be?
Astronaut.  I love the idea of space exploration.  Of course, to be an astronaut, I’d need to figure out how not to get motion sickness.  SIGH.  So maybe writing is a good choice for me!!

Thank you so much for joining me today and sharing your writing world Behind The Words. You can find out more about Holly and her books at:
Website
Facebook
Twitter

You can purchase Holly’s books at:
Amazon
B&N