The pub date for Death at the Day Lily Café was just a few months away and the promoting strategy was in full swing. This being the second in my mystery series, I had learned a lot with the first, Murder at Barclay Meadow. Most importantly, I needed to ratchet it up a couple of notches. 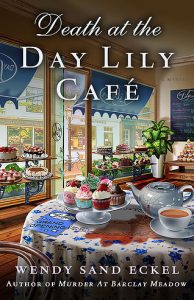 This time around I decided to try for a first class book trailer. I am a visual person. I like soft colors, a neat home, open spaces, and really good movies. And that’s when I knew who to ask.

Terese Schlachter is a woman of many talents. She has won Emmys and produced prime time television news. She is also a writer which is how we crossed paths. A tall, athletic blond, Terese has a no nonsense approach to life. One of her current projects is starting up Ridgeback Communication, a film production and promotions company. When she agreed to take on my project, I was thrilled.

In Death at the Day Lily Cafe, the protagonist, Rosalie Hart, has opened a cafe in a small town on the Eastern Shore of Maryland. It is her dream realized and when the grand opening is in the midst of a successful morning — sated and happy customers, flawless food coming out of the kitchen in a timely fashion, an unflappable wait staff — a friend appears in the doorway looking bewildered and a little bit scared.

Doris Bird had helped Rosalie out of a pickle more than once, so when she asks for a favor, Rosalie doesn’t have the heart to say no. It seems Doris’ baby sister has been charged with killing her husband with a gun shot to the chest. The local sheriff is certain she did it and Doris needs Rosalie to clear her name.

“We’ll need to have the trailer switch from light to dark,” Terese had said. “Do you have a shotgun?” 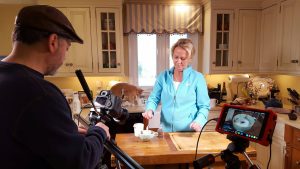 Terese’s ideas on how to put the plot twist into our film were brilliant. My kitchen would be the first filming site. Did I mention I’m not much of an actress? At the age of five I tried out for a local production of the Sound of Music. I didn’t get the part because I had the hiccups while singing, ‘Do, Re, Mi.’ It may not have scarred me for life, but it came pretty close.

The day filming was to begin, Terese and Allen showed up at my door with enough equipment to fill my entire family room and kitchen. We had a list of ‘takes’ and I had all the props at the ready. The takes included: making a latte, frying bacon, chopping an onion, and dropping a day lily into a vase. Easy enough. Right?

The latte was first up. The plan was for me to drop a dollop of frothed milk into a large mug of coffee. I held the mounding spoon over the cup waiting for the go ahead. “Wait,” I sad. “My hand looks old.” I looked up at them. “Should I put makeup on it?”

“No one will notice.” Terese eyed me over her glasses. “But could you at least stop it from shaking?”

After several takes, Allen said, “I don’t know how to say this, but, well, it kind of looks like, well, the dollops look like…”

“Enough said.” Terese put the mug in the sink. “Let’s try the knife.”

I pulled my longest and shiniest knife out of the wooden block on my counter and picked up a hefty white onion. “There will be happy music for this portion,” Terese said. “So chop away.”

“No problem,” I said. I loved to cook and make up recipes. Thus the cooking theme in my mystery series. After peeling off the papery skin, I began to dice the onion, my wrist and fingers moving deftly. Allen held the camera up. “One sec,” I said. Tears had begun to seep from my eyes.

He rested the very heavy camera on his shoulder and waited.

Once we had a good take on the onions, Terese instructed me to drop the knife on the floor. She held it menacingly high over my newly refinished wood floor. “Drop it from here.”

Allen and I exchanged a glance. “Are you sure?” I said.

“Yeah.” She nodded. “It will clatter to the floor. That’s when the video turns from light to dark. Right after the gun shot.”

“But it has to clatter.”

I grabbed a kitchen chair and stood on it. “I’ll drop it on the cutting board from here. It will be plenty calamitous.” Allen checked the light.

After several hours, they had what they needed. It wasn’t smooth sailing. Frodo the orange tabby, sashayed through the flower scene, rubbing his chin on the vase and spilling its contents. And the first batch of bacon burned to the point of filling the filming site with thick dark smoke. But at last it was a wrap.

I lauded them both with thanks and praise as they headed out the door. They were off to the Eastern Shore. Everything was ready for them, including a borrowed shelter dog to play ‘Dickens’ the chocolate lab.

Two days later, after making his film debut, the lab was adopted into his forever home. I on the other hand, shall stick to writing.

Rosalie Hart has finally opened the café of her dreams. Decked out with ochre-tinted walls and stuffed with delicious organic fare, the Day Lily Café is everything Rosalie could have hoped for. But not five minutes into the grand opening, Doris Bird, a dear and trusted friend, cashes in on a favor–to help clear her little sister Lori of a first degree murder charge.

With the help of her best friend and head waiter Glenn, Rosalie is on the case. But it’s not going to be easy. Unlikable and provocative, murder victim Carl James Fiddler seems to have insulted nearly everyone in town, and the suspect list grows daily. And when Rosalie’s daughter Annie gets caught in the crossfire, the search for the killer becomes personal in this charming cozy perfect for fans of Diane Mott Davidson and Joanne Fluke.

You can interact with Wendy in these places!