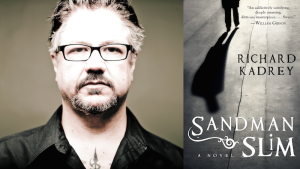 Even the most dedicated readers can feel out of the loop when new subgenres are introduced. Though the term “urban fantasy” has been around since the 80s and 90s, it’s become more popular in recent years and is used to describe novels like Sandman Slim, Tithe, and Moon Called. These are fantasy novels that take place in an urban setting, but they’re also wholly unique. Readers began to wonder if UF meant horror, or heavenly beings, or werewolves, or how it was at all different from a regular paranormal or fantasy novel. Richard Kadrey, author of the Sandman Slim series, is here to clear things up. Here, Kadrey shares his experience as an author within the genre and offers good advice for readers about learning to define genres on their own terms.

Sandman Slim is urban fantasy, but I didn’t know that when I wrote it. In fact, I didn’t hear the term “urban fantasy” until after the book was finished and sold. I thought I was writing a fantasy or, at most, a contemporary fantasy. Nine Princes in Amber by Roger Zelazny and Our Lady of Darkness by Fritz Leiber were the kind of books I was thinking of when I started my series. But are they urban fantasy (UF)? They certainly seem to fit in the subgenre, but both were written long before it existed.

I have nothing against the term or the books in the genre, but urban fantasy was invented as a marketing tool and because of that, I’m wary of it. For instance, I think UF readers would like Wake of Vultures by Lila Bowen, it’s possible they’ve never heard of it because it doesn’t fit into the subgenre, but it fits my definition of urban fantasy. Your definition is probably different. That’s all right. That’s how it should be. My UF doesn’t have to be your UF. In fact, it probably shouldn’t be.

As writers and readers, we shouldn’t ever feel restricted by marketing concepts and shorthand descriptions of book categories. Talk to your friends about UF. Argue about it. But don’t just say what isn’t UF. Say what you think UF is and should be. This is a great way to learn about books you might have missed otherwise. Plus, arguing about books is an excellent way to spend an evening. Drinking, whether coffee or bourbon, makes it even better.

To be fair, I really shouldn’t be complaining about UF at all. Sandman Slim came out when urban fantasy was riding high and because of that, the book got a lot more attention than it would have otherwise. However, earlier this year I was told that UF is in the toilet and that publishers are wary of new UF work. So much for a marketing category getting you noticed. Of course, by the time this comes out, UF might be king of the hill again. The point is that as a writer you can’t take these labels too seriously, and as a read you shouldn’t limit yourself to any category of books.

All right. I’ve gotten off of my soapbox. Here are a few of my favorite urban fantasy novels. You might note that one or two are frequently lumped in with horror. So isSandman Slim. There’s a weird and somewhat pointless marketing crossover point between the two categories, but don’t get me started on that…

Our Lady of Darkness by Fritz Leiber

The Coldest Girl in Coldtown by Holly Black

The Shining Girls and Broken Monsters by Lauren Beukes

The Ballad of Black Tom by Victor LaValle (Technically a novella, but this is my list and I reserve the right to cheat a little)