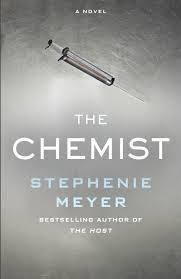 THE CHEMIST, from mega-bestselling author Stephenie Meyer’s is her first thriller. The worldwide English-language release of the book is set for November 15, 2016.

Stephenie Meyer said: “THE CHEMIST is the love child created from the union of my romantic sensibilities and my obsession with Jason Bourne/Aaron Cross. I very much enjoyed spending time with a different kind of action hero, one whose primary weapon isn’t a gun or a knife or bulging muscles, but rather her brain.”

Reagan senior vice president and publisher of Little, Brown and Company said: “Stephenie Meyer’s considerable storytelling talents have made her one of the most beloved authors in the world. Those talents are on full display in THE CHEMIST, and we are over the moon that she’s returned to the world of adult fiction with this exciting, edgeof-your-seat thriller.” About the book: In this gripping page-turner, an ex-agent on the run from her former employers must take one more case to clear her name and save her life.

She used to work for the U.S. government, but very few people ever knew that. An expert in her field, she was one of the darkest secrets of an agency so clandestine it doesn’t even have a name. And when they decided she was a liability, they came for her without warning. Now she rarely stays in the same place or uses the same name for long. They’ve killed the only other person she trusted, but something she knows still poses a threat. They want her dead, and soon. When her former handler offers her a way out, she realizes it’s her only chance to erase the giant target on her back. But it means taking one last job for her ex-employers. To her horror, the information she acquires only makes her situation more dangerous.

Resolving to meet the threat head-on, she prepares for the toughest fight of her life but finds herself falling for a man who can only complicate her likelihood of survival. As she sees her choices being rapidly whittled down, she must apply her unique talents in ways she never dreamed of. In this tautly plotted novel, Meyer creates a fierce and fascinating new heroine with a very specialized skill set. And she shows once again why she’s one of the world’s bestselling authors.

About the author: Stephenie Meyer graduated from Brigham Young University with a degree in English literature. Her internationally bestselling Twilight series has sold 155 million copies worldwide. In 2008 she published The Host, her first novel for adults, which debuted at #1 on the New York Times and Wall Street Journal bestseller lists.

The Host has sold more than 5.3 million copies in the U.S., with an additional 3.7 million copies sold worldwide, and was released as a feature film in 2013. Meyer lives with her husband and three sons in Arizona.