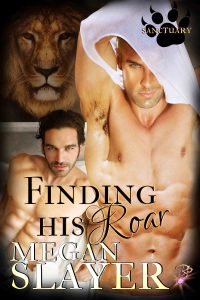 Breaking down and asking for help could be the key to his salvation.

Chris isn’t like the shifters at Sanctuary. Born in a zoo and on the run now that he can shift, he’s looking for a place to belong. When he breaks down outside of Cambridge, not far from the Sanctuary, he thinks he’s done for. He’ll be caught, returned to the zoo or worse… He’s always been a survivor, but even Chris has demons he can’t quite outrun. He’s being hunted. He’ll need some help—if he’s willing to accept his fate.

Luke Stephens wants nothing more than to get over his ex-boyfriend. The lawyer can argue cases with ease, but not the one that mattered. That is until he meets Chris. The shifter provokes Luke and brings out his natural instinct to protect. He’s intrigued and Chris is so handsome.

Will Luke be man enough for the shifter or will the danger come between them before they can get the fire started?

EXCERPT:
Luke strolled out of the building and put on his sunglasses. He strode over to his car then tossed his jacket and his briefcase onto the backseat before climbing behind the wheel. He turned on the radio. One of his favorite songs played, so he blasted the tune and sang along as he drove down the lane away from the Sanctuary. Though the property sat on a state route, there wasn’t much traffic. He stopped just past the gate and checked the traffic before pulling onto the road. He started toward Oakdale, but at the single crossroads before the city limits, he noticed a beat-up brown truck.

He paused. People never abandoned cars by the intersection. They waited for the dirt turnaround about a mile down the road. Was there a problem? An accident? He normally would’ve kept going, but something called to him. He noticed a man behind the wheel of the vehicle. The need to help strengthened. For all Luke knew, the guy was having a heart attack or maybe a seizure. He needed to stop and help.

Luke pulled off in front of the vehicle and patted the gun he’d strapped to his hip. He kept himself current at the gun range but hadn’t needed the piece until now. He backed up alongside the vehicle and rolled his window down.

“Do you need help?” Luke asked. He kept one hand on the car’s shifter. “Buddy?”

The wide-eyed man stared at Luke. “What’s your name?”

“My…” This was odd. “Luke Stevens. I’m an attorney. I work with the Sanctuary.”

The guy bolted out of the truck and yanked on the passenger-side handle of the car. “Help me.”

“I don’t know you. Are you hurt? I can call the ambulance.” He didn’t unlock the door. For a split-second, he could’ve sworn he saw a lion in the man’s eyes. It had to be his imagination. He’d never seen the animal in Markas’ eyes, and he knew Markas was a shifter. Could this man be a shifter? Or the jerk sending the screwy emails?

“I’m not hurt yet. Please? I need help.” Another flash of the lion shone in the man’s golden eyes. “You were honest with me. I’ll be honest with you. My name is Saul Mason. I was born at the Philadelphia Zoo four years ago. I’ve been able to shift for a year, and the first time I shifted at the zoo, the workers thought someone had stolen me. They thought I was the thief. I didn’t steal a lion—I am the lion.”

“A shifter.” Luke had already been given that information, but he had to stay it out loud to make sense in his head.

“And you’re with the Sanctuary. Help me.” The pleading in Saul’s voice got to Luke. “Please?”

He unlocked the door. “Get in.” He could take Saul back to Sanctuary, and if nothing else, help him get established there. God knew Markas would see through Saul if the guy was lying.

Saul crawled into the car and locked the door. He hunkered down on the seat. “Fate’s a bitch, but at least, I found you and not him.” He put the window up. “I think I’m actually safe.”

“Did you need something—anything—from your vehicle?” Luke asked.

“No. It’s from a friend. Some people think I stole it, but I didn’t.” Saul curled up in the seat. “I’m not a good guy. I’ve done bad shit in order to stay alive. I didn’t steal the truck, but I don’t regret taking it. A man named Tucci swore I belonged to him. I don’t know what he wants, but it can’t be good.”

“Tucci? As in Anthony Tucci?” Luke put the car in gear and made an illegal U-turn in order to go back to Sanctuary.

“Oh God. Don’t tell me you work for him.” Saul scratched at the door handle. “I need to get out.”

“Stop.” Luke swatted at Saul. “No, I don’t.” He punched the gas. The faster he got to Sanctuary, the quicker he could unload Saul. “I don’t know where Tucci is. I’ve never met him, and no, I don’t work for him. He’s not high on my list, though.”

“You’re not a shifter.” Saul remained low in his seat, but his tone changed. He stared at Luke. “I can smell it. You’re not.”

“That’s how you know? My smell?” He’d showered that morning and put on antiperspirant. Hopefully, he didn’t stink.

“You’ve got a scent, yes. It’s not like a dirty smell. It’s just you, and my lion can tell. It’s what told me; you’re a safe person. Sometimes, my instincts have been off, but not this time. Most people freak out when the word shifter is used. You didn’t flinch.”

“I’m honored, but I’ve worked with shifters before. I never know what to expect with them, but I’m not scared, either.” He wouldn’t admit to his fear, though. For all he knew, Saul could snap and do something horrible to him. “My friends run the Sanctuary. They’ll help you as much as possible. As for the maybe-not-quite stolen truck, I should get that sorted out.” He should probably turn Saul in, too, but he’d worry about that later.

“I wasn’t lying. I didn’t steal it. The truck was given to me by the one human who actually believed I was a shifter.” Saul grasped Luke’s free hand. “I borrowed it because I needed to get away from the zoo. I had permission.” He faced Luke. “At the zoo was a keeper named Saul, and that was his truck. He didn’t want it, but he wanted to help me get away from Tucci. He saw me shift and didn’t flip out. He said shifters are natural creatures and should be respected. He helped me until the freak-out died down then he got me out of the zoo. He’s the reason I’m here and not in the enclosure or dead.”

“If I contact him, will he verify this information?” Luke asked. He turned back onto the Sanctuary lane and swiped his keycard in the reader. He wasn’t sure if he believed Saul—or whatever the shifter’s name happened to be—but he also wasn’t convinced the story was a lie.

“Yeah.” The shifter offered up a badge. “See this? This is his old one, but it’s got his information. I’m supposed to say I’m him if I get into trouble.” He pointed to the plastic card on the lanyard and sighed. “So you’ll help me?”

“John and Joe will wonder why I’m back here already.” Luke parked the car in front of the fountain. “Let’s go inside. You can tell them everything, and they’ll help you.”

You can purchase Finding His Roar at:
Resplendence Publishing
Amazon
AllRomance ebooks