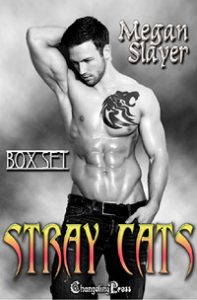 He’s got cat class and cat style — she’s got the flash. Together they’ll create magic.

Hildegard’s given kittens to a few special young women, but her cats aren’t all they seem. Each skeptical owner plus her affectionate shifter equals love cat-style — but will love prevail over the evil threatening to kill their furry best friends?

Together these cat shifters and a very special witch will create magic.

“If I don’t let Godzilla out, I won’t have curtains. Again.” Hayden stepped outside the restaurant and jabbed the numbers on her phone to call her friend, Cole. She needed a ride home.

She clutched her pepper spray in one hand and her purse in the other. No way she’d let some creep-o terrorize her. “I’ve got to get to Godzilla,” she chanted as she waited for her friend to pick up the phone. “I never should’ve let that asshole take me out. Damn grabby hands.” Visions of shredded curtains and one pissed off black cat came to mind. But just like a dog or his monster namesake, if he didn’t have time to wander around the backyard, he destroyed things in her house.
“You never should’ve gone to lunch with him,” a voice said. “Not on Halloween.”
Hayden screamed and whipped around, her purse leading the way. If she was going down, she’d go down swinging. “Who the hell are you?”
The person who’d spoken stepped out of the shadows. “Chill.” He put both hands up. “I’m not armed.”
Hayden inched closer to get a better look at him. Dear God in Heaven, the man was naked and in front of a restaurant full of people. Her gaze roved down his lean torso to the thatch of black hair at the base of his cock. She swallowed hard. Naturally, the crazy man would be good looking. Her luck didn’t run any other way.
“Hayden, honey, I don’t want to hurt you.”
A shiver ran up her spine. Didn’t want to hurt her? How the fuck did he know her name? “Who are you?”

“Godzilla. It’s a stupid name for a cat. My brother would be named Godzilla. He likes to bite and scratch. Although, naming him Fang worked, too. Hildy thinks it’s funny to name us after things we do.” He shrugged. “I just destroyed that set of curtains by accident. I never meant to piss you off.” The man folded his arms. His black hair shimmered, and his eyes glowed the same shade of green as her cat’s. He even had the same odd way of staring at her as if he knew what she was thinking, and he talked like he knew all about her cat.

“Do you want my purse?” She stuck out her hands. “Take it.” The guy might remind her of her cat, but cat shifters were the stuff of legend. Besides, didn’t Halloween bring out the crazies? Yes, he was some lunatic in character trying to scare the shit out of her… and it was working. She shivered. “Take it.”

“I’m taking you home.” He swatted her hands down. “There’s a long story I need to tell you, but the short of it is, yes, I’m a shifter. I chose you as my human, and now I’d like to go home and explain where you won’t freak out.” He inched toward her. “I won’t hurt you, but I will rip the limbs off the asshole who dicked you over at lunch. Now let’s go. It’s freezing, and I’m not fond of showing my ass off in public.”

“No.” She held her ground. “I don’t know you from Adam and you want me to take you home? No way, buddy. Blow.”
“Now that’s just mean.” He scratched his brow. “Okay, look, I come from a long line of shifters. Black cat shifters. My litter had four. Hildy knew about us and protected us from a scientist who would like to use me for some crazy-ass experiment. Somehow she knew you needed me. I’m glad you took me home because I knew you were the one for me.” He stepped closer to her. “Hayden, I need your help. We aren’t legend, and some bad people know about me. You’ve got to help me.”
He crouched down before her and curled into a ball. His human form morphed into a cat. After a moment, the cat sat on his back legs and stared up at her. He even had the tiny white tuft on his chest — the same tiny white tuft like Godzilla had.
“Godzilla?” Hayden swayed on her feet. This wasn’t happening. Her cat was a cat, not a shifter. She collapsed on the nearest bench and rested her head in her hands.
A pair of bare feet strode over to her. She glanced at the legs connected to the feet. The man squatted down in front of her. The mystery man who claimed to be her cat. Tears blurred in her eyes. What else could she do? Laugh or cry?
“Hayden, honey, shifting destroys my clothes.” He tipped his head to look her in the eye. “Let’s go home. I’ll explain everything there. I’ll show you what I am.”
Stray Cats is available at:
Changeling Press
Amazon
AllRomance Ebooks
Barnes and Noble
About the Author: