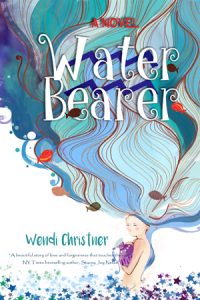 One last summer together forever changes the lives of best friends in a small Southern community. These unforgettable characters and their moving story linger long beyond the final page.

Seven years after Cassidy Strumond set the fire that consumed her parents, the scent of ash still lingered in the newly sprouted corn and in the wide blades of grass that blanketed the rolling hills; only, nobody seemed to smell it but her.

Cassidy rolled her high school diploma over the worn floor planks of her grandmother’s back porch and watched Jared Walker’s horse, Delilah, clomp across the stone footbridge that spanned a stream separating her family farm from his.

The arms of a young man who worked outside and handled livestock for a living extended from the sleeves of a t-shirt that looked like he’d slept in it. His pointed boots stuck out from the frayed legs of his jeans, and the outline of his thighs pressed against the easy fitting denim. Details she had only recently begun to notice. He looped Delilah’s reins around the porch railing and lowered himself onto the steps.

“Is that what you wore under your graduation gown?” She knew the answer before his lopsided smile betrayed him.

“Figured if I was gonna wear a dress, I’d better look like a man underneath. What’d you wear under yours, a suitcase?”

“Nothing.” She eased the hem of her navy blue polyester gown up her bare calves and laughed as the implication registered on his features.

She took hold of the zipper at her throat. “Wanna find out?”

“There’s something bad wrong with you, you know that?”

“Yeah, I know.” Cassidy squinted at the branches of a massive oak in the middle of the pasture.

Beyond the oak, on the back acres of the property, were the ruins of her childhood home, reduced to a charred foundation and three concrete steps that led to an emptiness she could taste in her soul. From this rubble, the odor of her every nightmare emanated. As long as she stayed here, she would live with the smell of death.

One short summer and she could put this place and its constant reminders behind her. The solace she sometimes found in the cornfields and pastures beyond her bedroom window; the giant oak at the top the hill; Samson, her palomino—and Jared—her best friend would never be enough to hold her or to erase the memory of what she’d done.

She tugged his sleeve. “Come to Tampa with me. I’ll bet the city could use another cowboy.”

His gaze fell to the step between his boots. They both knew he had to live at home and commute to the small university just across the state line in Alabama. A farm the size of the one he grew up on needed more than just his father to manage it, but more than that, Jared loved to farm. It was who he was. He would make a life there in the rural rolling hills of north Florida. He wouldn’t be happy anywhere else.

“Just one semester in Tampa?”

“Heard they don’t even sell boots south of Ocala.” He smiled, but Cassidy could see the sadness in his eyes.

She stood to go inside. “Saddle Samson for me. He needs to get used to you handling him anyway.”

“You’re not ever coming back, are you Cass?” He wasn’t looking at her, focused instead on the pasture. It was more of a statement than a question, and they both knew the answer.

What Jared didn’t know, what he couldn’t understand, was why. And she didn’t have the words that could change that.

This place would always be about fire to her. She would always smell the smoke, feel the heat. The sun would blaze one minute burning her skin, and when that season passed, the maples beyond the pastures would set the horizon ablaze with their red and yellow leaves, or a thundercloud would roll in and turn the sky as gray as smoke. As close as she and Jared were, he could never feel what she felt. He could never understand how long a fire could burn. All she wanted was to leave the pain behind, to find a place in the world that wasn’t scarred by her actions, a place where the ghosts didn’t live.

“Hurry up and get decent,” he said. “I’ve got a graduation present for you.”

Cassidy went inside and changed. When she came out again, his back was pressed against a porch post, and his cowboy boot tapped out a rhythm on the wood. Samson stood nearby, too proud to be tethered to the house.

“What?” she said as she mounted her horse.

“I didn’t say anything.” A thin line creased his forehead and a frown dipped the corners of his mouth.

“The look I was born with.” He straightened himself and grabbed Delilah’s reins.

A cloud settled in Jared’s eyes, but he didn’t respond. Cassidy nudged Samson with her heel, and the palomino took off at a trot.

Jared and Delilah were soon alongside.

At the top of the hill, Samson stopped next to the trunk of the oak, but before Cassidy could step down, Jared grabbed the reins and pulled them from her hands.

She jerked them back, but he didn’t let go.

She held tight, stretching the leather taut between them.

“Cass, please just come with me. I promise I have a reason.”

She released her grip, and the knotted strips of leather fell against his wrist.

He led Samson down the hill. Over her right shoulder she could see the small iron gate to the family cemetery. At least they weren’t going there.

You can purchase Water Bearer at:
Amazon 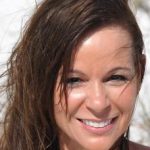 Wendi Christner is the author of Writer’s Digest Short-Short Story Competition winner “Throwing Stones,” a fairy self-help book, and several novels written under various pseudonyms. Her gritty, emotional stories tend to have a Southern voice born of her roots in the Florida panhandle. She currently lives in Tampa with her husband, son, and their fur family.