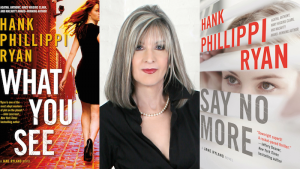 7 things Being a TV Reporter Taught me About Being an Author
Guest post by author Hank Phillippi Ryan
Reprinted with permission from Bookish.com

Bad guys do not want a phone call from Hank Phillippi Ryan. This top-notch TV journalist has won 33 Emmys for her groundbreaking investigative reporting—she’s changed laws, changed lives, gotten millions in restitution for consumers, and sent criminals to jail. She’s equally successful in her career as a best-selling crime fiction author—winning five Agathas, three Anthonys, and the coveted Mary Higgins Clark award. Her eighth novel, What You See, hits shelves today as a paperback release, while her ninth, Say No More, will be out in hardcover on November 1. Ryan’s mysteries are unsurprisingly inspired by her years in the newsroom. Here, Ryan shares seven invaluable things she learned from her time as an on-air reporter.

I’d been a television investigative reporter for decades—wiring myself with hidden cameras, confronting corrupt politicians, going undercover and in disguise—when I finally had a good idea for a thriller plot: secret messages in computer spam. This eventually became my novel Prime Time.

But back then, after all those years of just the facts and only the facts, I wondered whether my brain would allow me to make stuff up.

As I began spinning out that first fictional story, I realized all those years in TV were the best training ever. What did journalism teach me? It’s all about telling a great story. With characters you care about and an important problem that needs to be solved. You track down clues, follow leads, and make complicated topics entertaining and irresistible. And in the end you want some justice, and you want to change the world a little bit.

So I began to wonder, since the basis of crime fiction writing and investigative reporting are the same, what else has my TV career taught me?

When I started writing, an author pal of mine complained that she was incredibly behind, and she would have to ask her editor for a two-month extension. I was floored. Two-month extension? If I asked that of my news director I would no longer have a career! It’s part of my writing work ethic now too—no matter what, through even the worst writing day, you don’t miss a deadline.

The key is to stop worrying, and write. When you set your intent to “just do it,” the proper words will come out.

I get hundreds of story tips a week—calls, emails, anonymous letters in scrawly underlined handwriting. Which one is the next Emmy winner? It’s frustrating that I can’t follow up on each one. But I have learned—just as in choosing a plot for my books—initial story selection is key. Is the topic/plot I choose important enough to expend so much of my imagination, time, and energy? Is the idea rich and compelling enough to carry a whole book? I imagine it like a stone plopped in a quiet pond—will my story idea make a big splash? Can the ripple effect create intriguing and fascinating subplots? Sometimes a story idea that seems like a glittering jewel on first thought fades under scrutiny… while another seems to expand, pulsing with energy and possibilities.

3. Face your problems—sometimes your inner voice is right

Sure, there’s the annoying voice that tries to convince us that this writing thing was a bad idea, and we’re headed for failure. That voice? Ignore. But when your brain keeps snagging on a word, or a line, or a scene, the voice is trying to communicate. Have you left something out, jumped to a conclusion, made a continuity error? Those times where you tell yourself: “Oh, no one will notice that”? That’s exactly what they will notice. On TV, a mistake is not a career-ending error until the story gets on the air. In a novel, it’s all fine until the book goes to print. Don’t be faint of heart. Tackle your problem, and fix it.

After all the work you do, your first instinct might be to fight back. Be defensive. Argue for doing it your way. But listen, consider, and give it another thought or two. If someone offers a great idea that makes your story better—that’s a good thing. One of my most freeing moments was when I realized: “Whoa. I could be wrong.” At that moment, whole new doors to success opened.

5. Time is the most valuable commodity

Every news story or manuscript benefits from a thoughtful focus on choosing the most evocative word, the most compelling action, the most intriguing structure. When there’s a burning building and you’re doing a breaking news live shot? Go with what you’ve got. But when you have the chance to tweak and polish and craft a better product—grab that time and use the heck out of it.

Every news story I’ve ever worked has a moment when I think, “Oh, no. This is terrible. I don’t have everything I need. This stinks.” And my tirade ends with: “And what’s more, there’s no possible way to fix it.”

And then, inevitably, soon after, I get an idea. And the story is better than ever. Finally, after a ridiculous number of times having exactly the same conversation with myself, I realized—hey. This is the time I always panic. That means the moment of success is imminent. Now when the panic comes, I pat myself on the back and embrace the moment. I know I’ve reached the point in the journey where—soon—I’ll be delighted. It always works. It has to.

Being in journalism is all about embracing change—that’s why they call it the news! Things happen so quickly and so unpredictably that it’s a waste of time to be upset or unhappy by a reversal or disappointment. How many wonderful highs have come in your life—right after a dismal low? Might as well be optimistic.

Hank Phillippi Ryan is the on-air investigative reporter for Boston’s NBC affiliate. She’s won 33 Emmys, 14 Edward R. Murrow awards and dozens of other honors for her groundbreaking journalism. A bestselling author of nine mystery novels, Ryan has won multiple prestigious awards for her crime fiction: five Agathas, two Anthonys, the Daphne, two Macavitys, and for The Other Woman, the coveted Mary Higgins Clark Award. She’s a founding teacher at Mystery Writers of America University and 2013 president of national Sisters in Crime.