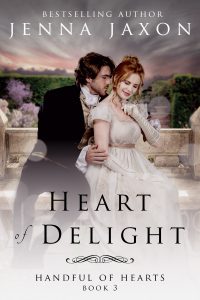 He’ll do anything to be her heart’s delight—except tell the truth.

Gabriella d’Adventure is on a mission. She has come to England as a lady’s maid in pursuit of the Duke of Rother. When she meets Horace Carpenter, valet to a marquess, she is delighted to enlist his aid in gaining her heart’s desire: a meeting with the duke. But will her growing feelings for the handsome valet interfere with her plans for the duke?

The eccentric Marquess of Halford, Hal to his friends, is tired of the demands of Society, especially his father’s decree that he marry this Season. When a breathtaking young woman intrudes on his solitude, he is captivated and introduces himself as his valet in hopes of learning more about her. Despite his fear about the true motive behind Gabriella’s quest to meet the Duke of Rother, Hal agrees to help her gain an audience with him, all the while praying his deception won’t ruin his chances of winning her love.

The young man flushed, and Gabriella smiled to herself. He was likely a servant she had caught taking his ease from his duties. It meant nothing to her, of course. She was doing the same thing, although la comtesse, who she had seen dancing below, would not need her for some time, if she were lucky. The English, however, always seemed embarrassed about taking time to rest. Ah, well, she would feel no such thing. Such a difficult race, l’Anglais.

“Can you tell me your name, monsieur? I would like to thank you properly.” She batted her eyelashes at the handsome man. Flirting always broke the ice.

“H…Horace, mademoiselle. Horace Carpenter. I am valet to the Marquess of Halford.” He glanced down at his feet.

Ah, as she’d suspected. Of course, the man should not be here any more than she. That could be the cause for his shyness. “Then merci beaucoup, Monsieur Carpenter. You have been most kind to me.” She smiled, sincerely this time. Such a very attractive man. And she was grateful for his help. If she were lucky, he could further aid her in her quest. The assistance of someone in society would be necessary to carry out her plan, and this man worked for a powerful man, a marquess, no less.

Like a gift from a beneficent God sent to her.

She laid a hand on his arm, drawing him back to the railing. “You have shown me the Duke of Rother, so you or your master must know him, non?”

“Uh, oui, uh, yes. My master, the marquess, knows him very well. That is how I knew him…to point him out to you.” Monsieur Carpenter started and struggled, as if he did not quite know how to speak English himself.

Had her flirting affected him so badly? She had not meant to fluster the man so much that he could not speak. Still, Maman had always told her she would make the men mad with passion. Ah, well, she would cease her little dalliance, and hope he would still be of help to her.

“I wonder, monsieur, since you know very well the ways of the English aristocracy, if there is a way for me to meet this duke?”

His arm beneath her hand stiffened. “Why would you want to meet a duke?”

“Oh, it would be très excitant, to meet so powerful a man, n’est-ce pas?” She squeezed his arm and gave a little laugh. If he could help her, she would truly be grateful, however, she did not want him to displease his master.

“Perhaps, although he may prove more tedious than you think.” He furrowed his brows almost comically. “Wouldn’t a marquess be just as exciting? I am sure I could arrange a meeting between you and my master.”

Gabriella sighed. She had a specific reason for wanting to meet this particular duke, which she could not divulge to this stranger, no matter how nice he seemed. But how to put that delicately?

“I am certain your marquess is a man très formidable, monsieur. Mais, I have set my heart on meeting a duke.” She smiled up at him again, and clasped his arm tighter. “You will think it is just the silly whim of a young, foolish girl.”

“Tell me.” His eyes searched her face, and she met their gaze without hesitation. What she could tell him was the truth.

“From the time I was a very small girl, I have had one particular dream. To meet a duke. An English duke, in fact. My mother met such a man once. She told me all about it, how it changed her life. Ever since then, I have hoped and prayed for this to happen.” She glanced at the man again, now laughing with a lady in blue. “I am so close to attaining this happiness. Can you not help me?”

“A duke.” Monsieur Carpenter put a hand to his head, rubbing his temple as though struck with a pain. “Can it be any duke?”

Gabriella held her breath. The young valet obviously wanted to help her. A nudge in the correct place, and he might be tempted enough. “I have heard my mistress speak of this Duke of Rother.” She pointed to the handsome man, who quite took her breath away. Never had she dreamed he would be so dashing. “She says he is the most distinguished and commanding of men. Now I see him for myself, I know she did not lie. Il est très beau, n’est-ce pas? And since I have seen this duke, this is the one I wish to meet.” She stared at him, daring him to dispute her words. “Is there any other English duke so attractive? So splendid? So noble?”

“I grant you, the duke is a fine specimen of an English nobleman.” Monsieur Carpenter’s face had paled. “However, this may prove more difficult than I first believed.”

“Will you help me, monsieur?” Artifice had gone. Gabriella spoke from her heart.

He closed his eyes and nodded. “I will speak to my master about it. If anyone can arrange it, he can.” A long pause, and the valet opened his deep brown eyes and sighed.

“Oh, monsieur. Merci, merci.” She flung her arms around him. At last she would meet the Duke of Rother.

Monsieur Carpenter, instead of letting her go, pulled her closer.

She tried to push back, but he enfolded her in his arms, drew her toward his warm body. Then his mouth met hers. His soft, insistent lips sent a thrill through her she’d not experienced before. Relaxing against him, she gave herself over to pure pleasure as their mouths dissolved into one another. A delightful heat sizzled in her veins. She should not have been enjoying this, yet the tingles he caused to skitter up and down her spine could not be denied.

At last, he broke the kiss and stepped back. “That was the loveliest thank you I have ever received.”

You can purchase Heart of Delight at:
Amazon

About the Author:
Jenna Jaxon is a best-selling, multi-published author of historical romance in periods ranging from medieval to Victorian.  She has been reading and writing historical romance since she was a teenager.  A romantic herself, she has always loved a dark side to the genre, a twist, suspense, a surprise.  She tries to incorporate all of these elements into her own stories. She lives in Virginia with her family and two rambunctious cats, Marmalade and Suger.  When not reading or writing, she indulges her passion for the theatre, working with local theatres as a director.  She often feels she is directing her characters on their own private stage.

Jenna is a PAN member of Romance Writers of America and is very active in Chesapeake Romance Writers, her local chapter of RWA. She has equated her writing to an addiction to chocolate because once she starts she just can’t stop.

Find more about Jenna online at: