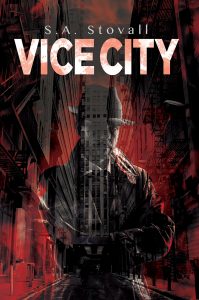 Welcome S.A. Stovall! Please, tell us the synopsis of your book.

Vice City starts in the middle of a mobster interrogation. Nicholas Pierce, head enforcer of the Vice family syndicate, watches over two thugs beating a guy for information. Turns out, this guy, Miles Devonport, might be a police mole, but he’s not talking.

Tired of watching blood hit the floor, Pierce sends the goons away and questions Miles himself. Turns out, all of Miles’s suspicious activity has nothing to do with the police—he’s attempting to get his brother out of a rival street gang that deals in drugs and prostitutes. Miles kept quiet to keep his brother safe, as they could both get killed, but he admits to Pierce that it’s most likely the end of line for him.

But Pierce likes this kid’s moxie. He’s an old-fashion kind of guy that admires grit and honor. He decides to lie to syndicate enforcers and help Miles find his brother, Jayden, even if he thinks it’s a doomed mission.

Things take a turn for the worst when the rival street gang, the Cobras, start killing off Vice family members one by one, seemingly with insider information. Pierce is tasked with protecting the mob boss’s children, but the more he learns about the Cobras from Miles, the more he thinks there’s a conspiracy in the works to kill people on both sides.

And to make matters extra worse, Jayden slips himself a steady supply of “street merchandise” and doesn’t want to be saved. His douchebaggery gets Pierce and Miles facing down more than one gun barrel, but Miles just won’t give up on bringing him home.

I don’t want to spoil everything, but suffice it say, Pierce and Miles want out of the gang war before it kills them, but nobody leaves in the middle of a gang war and lives to tell the tale…

The most unique? Well, I would say two aspects tie for first place.

First, I use a noir tone throughout the novel. Think Who Framed Rodger Rabbit—very graphic novel/comic book in terms of action and dialogue—and decidedly gritty. That doesn’t mean the novel took place in the 1930s! No, no, no. The novel is modern, but with the realistic edge of violence and description.

Secondly, the main heroes, Pierce and Miles, have a romantic sub-plot. While I think there are tons of awesome books that feature LGBTQ+ characters, most of them are straight romances. I guess I would describe mine more like, “What if Indiana Jones was gay?” We can still have all the fun adventures, chases, and fight scenes; we just get Harrison Ford hooking up with guy in the end.

Tell us about your main characters.

Nicholas Pierce is a top mob enforcer, streetwise and jaded. He has a sense of honor, and a “code of thieves” that dictates how he treats people. He doesn’t harm innocent bystanders, and his dislikes bullies, but he’s more than willing to get his hands dirty with villains.

Miles Devonport, on the other hand, is only 20 years old, and attempting to find his place in life. Since his mother abandoned him and his brother, and his father is white trash through-n-through, he makes it his responsibility to look after Jayden. He imagines himself a standup guy, but when packing heat for the mob is only way to make money, he reluctantly takes it.

What genres is this and who do you think will enjoy reading it?

I would say this is a crime thriller with an m/m romantic sub-plot. Fans of underworld stories, and m/m romances, will enjoy the hell out of it.

Yes! A few 5 stars reviews (one posted, the others waiting until closer to release) but nothing will top the sentiment I received early into production. I can’t share it all, but I’ll give a brief glimpse—an honest assessment that I appreciated so much I saved it to my computer and glance at it from time to time.

“The story has the feel of the best graphic novels, and it reminded me very much of Frank Miller’s Sin City in particular. As I read, I could easily picture it drawn in that style. That isn’t to say that the story seemed copied or anything like that; the elements and style are similar (in a good way), but the story itself is original and unique, while at the same time paying homage to the genre. The characterization is top-notch.

One of the things I respect most about [Stovall’s] writing is her ability to hit on a single, often small, detail that captures the essence of a character or setting. She’s often able to express in a few words what could take others paragraphs of description. It goes to show that when a detail is perfect, you don’t need a lot of them.”

I know, I know—save your rocks—I just can’t get enough of Gordon Ramsey. That man could call everyone in the world a fat donkey and I would still watch it.

I have a few books with my agent and the sequel to Vice City—titled Vice Enforcer—is already scheduled for release in April 2018. Plus, I’m in the middle of writing three more, so I intend to see this through the long haul.

I’m always willing to chat, be it with fellow authors or any of my fans! (*tumbleweed rolls by* Oh, right—Vice City is my debut novel—future adoring fans. :p)