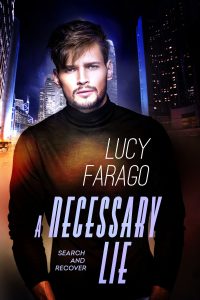 Searching for Spirits in San Antonio – By Lucy Farago

The first book in my new series, A Necessary Lie, revolves around Cowboy, a man with a closely guarded secret. He risks it all when he’s assigned to bodyguard Grace, a reporter searching for her missing friend, Jessie—the girl from the past Cowboy runs from. Unbeknownst to Grace, her father, the police chief, calls in a favor and has brought in someone from ICU, an elite investigation agency, to keep her out of trouble while she tangles with a powerful, political family suspected to be involved in Jessie’s disappearance.

I knew I wanted the first book to be about Cowboy—I have a thing for southern accents— but I needed to choose the right setting, the right fit for him. I’d been to San Antonio twice, once with my husband and then again for the annual Romance Writers of America conference. As I loved the city and everything it had to offer, I chose San Antonio.

Have you ever been to San Antonio? If you’re planning a trip you have to pay the Menger Hotel a visit. Built in 1859, this beautiful, historic building has attracted many famous guests, among them Theodore Roosevelt and Oscar Wilde. Go with an open mind, and if you find yourself in elevator with an uninvited guest, don’t worry. You wouldn’t be the first person to ride with a ghost. When I dragged my friend Christine to the hotel, guess where I wanted to start our tour? After several flashing buttons, a jerky false start and a scared friend who insisted we remove ourselves from the death trap…and my insistence that we stay…we made it to the third floor, the most haunted of the floors.

After we wandered for a bit, we came across one of the cleaners, who figured out we were ghost hunting. And here we thought we were the only lunatics. He explained to us the tale of the lady in red. Eager to see this lady in red, we followed his instructions and climbed the three steps onto the east corridor. There, he told us to take a picture of the white, guest room door at the bottom of the steps. Like eager little ghost hunters, we stared at our phones, expectantly waiting to see our first spirit in our pictures. Alas the lady in red, known for exiting the guest room and mysteriously appearing in tourists’ photos, failed to show. 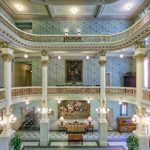 At this point, Christine wandered down the hall, leaving me to ponder what I had done to offend the lady in red. Baffled and yes, disappointed, I turned. And that’s when the floor beneath my feet shifted. It was so sudden and so pronounced, I had to grab the handrail to keep from falling.

Seeing my distress, Christine rushed back. She kept trying to come up with a reasonable explanation as to why I was on a roller coaster ride and couldn’t seem to get off. The man, hearing her, shook his head, giving me a knowing smile. Once I was certain I wasn’t going to lose my lunch, I took a tentative step forward and everything stilled. Brave hunter that I was, I tested my theory and stepped back, this time fully prepared. I repeated it and each and every time, the world tilted on its access, while Christine feet remained firmly planted. As we were now both experiencing headaches, we decided it was probably for the best that we left the spooky corridor.

Elated and certain I’d had an ‘other-worldly’ encounter, I was eager for more, and the nice man was only too happy to watch us freak out. He showed us a settee where it was said guests often saw a man and his young son. The phone still in my hand, I opened my camera to take a picture, but Christine insisted we have our picture taken in the settee, dismissing the notion that perhaps father and son wouldn’t appreciate us sharing their space. So we sat, but I accidentally hitting the camera button. I was going to have a very nice shot of my leg. Or would I?

After thanking our impromptu tour guide, we spent another twenty or so minutes searching for Geronimo, another well-known guest who refused to show his face, and then headed back to our hotel where we met up with more friends. While Christine proudly displayed the pictures she’d taken, I took out my phone. But where I expected to see my leg, I got nothing but a pure white screen. I would later call Apple to ask what would cause such a thing, but they had no explanation, and I wisely kept the ghost hunting to myself. Did I tell you that the picture of us sitting on the settee wasn’t on Christine phone either? Guess they didn’t care for our sitting on them after all.

Our friends, now thoroughly engrossed in our adventure, were eager to share in our ghostly encounters and insisted we return to the hotel. We somehow managed to get separated and they ended up on the one floor closed for renovations…with no way out…or at least no way out until the locked exit door suddenly unlocked. To make, I hope, what is an interesting story short, of the two ladies who returned with us, one experienced what I’d had, while the other went by way of the mysterious lady in red and got nada.

Cowboy’s hometown of San Antonio has many things to offer, including the River Walk and the Cinderella carriage ride Cowboy hires in A Necessary Lie, but if you feel a little adventurous, drop by the Menger Hotel. Sit in the bar where Teddy Roosevelt is often spotted having a drink or wander up to the third floor and look for the lady in red. You never know who or what you’ll find.

Readers Entertainmenthttp://dayagency.com
Previous articleSNEAK PEEK AND SALE BUBBLEGUM BLONDE FROM ANNA SNOW
Next articleSNEAK PEEK: Within A Captain’s Soul from Lisa A. Olech, Plus A Tribute to her Great-Grandmother