Isis – The Goddess Who Still Reigns by Catherine Cavendish 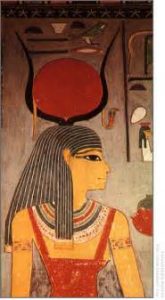 In the most ancient of Egyptian traditions, Isis was a relatively minor goddess but she rose to be one of the most important and enduring of them all. Even today, she is worshipped and venerated by members of such organisations as the Fellowship of Isis (formed in 1976). She was adopted by the Greeks, and by the Romans who renamed her Serapis. Cleopatra (herself Greek by birth) proclaimed herself to be the reincarnation of Isis, and temples to the goddess sprang up all over the ancient world.

Isis was married to the god Osiris who also happened to be her brother. Another brother – the god of chaos, Set – who features in my novel Wrath of the Ancients – murdered Osiris and hacked his body to pieces. Isis, goddess of marriage, wisdom and healing, searched for the pieces. With the help of Nepthys, her sister, and the god Anubis, she magically put him back together – all except for one critical part which could never be found. His penis. Still being a resourceful goddess, she magically conceived a child with him anyway. From then on, Osiris was neither living nor dead. As such he assumed the role of god of the dead and the underworld. Isis herself is often referred to as Queen of the Underworld. She also ruled over the moon, love and magic, rebirth and reincarnation. A busy goddess indeed! 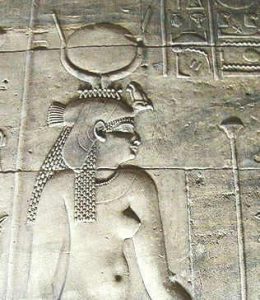 Many myths are associated with Isis. When, every year, the Nile flooded, people believed the water was the tears of the goddess as she wept for the slain Osiris. Her name means ‘Throne’ and her headdress is depicted as a throne on which the Pharaoh would sit. She was said to be a friend to the downtrodden and desperate but would also listen to the prayers of the rich. She was the epitome of motherhood and wifely virtue and often depicted with the Pharaoh as a child in her lap.

She could be brave and fearless when needed, protecting her son from attacks by snakes and scorpions and lying low with him in the marshes until he was fully grown and could assume his father’s throne. She also, it is said, taught Egyptian women their ‘wifely duties’ of brewing beer, baking and weaving. In short, she was the role model all Egyptian women of the ancient world aspired to.

There seems to have been no end to her talents, as she could shape-change into a scorpion, a bird or even a sow. When Horus became angry with her for not destroying her brother Set, he cut off her head but she used her healing magic and restored herself – complete with the head of a cow. Her association with other goddesses, such as Hathor, Nut and the cat goddess Bastet, no doubt helped diversify her powers. 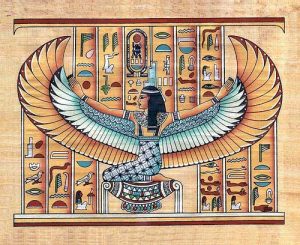 By the time of the New Kingdom (c. 1550-1077 BCE). Isis’s stature had grown to rank her as one of the foremost of all the deities. In her temples, she was attended by servants and handmaidens and her priests and priestesses were popularly supposed to have gained some of her powers and wisdom. They could interpret dreams and even control the weather.

Isis was adopted by both the Greeks and the Romans, and Caligula had a special affinity for her. During his reign he instituted a special annual festival in her honour when he would dress in women’s clothes and participate in the rites and celebrations. The festival was still going strong into the fifth century CE having survived several attempts to suppress it as a pagan abomination.

A cult of Isis sprang up with members undergoing initiation rites where they swore devotion to the goddess. Curiously, members were not expected to worship her exclusively and were drawn from many different religions – as well as those not having any other faith. (This practice is echoed today by the Fellowship of Isis who claim to have around 24,000 members worldwide drawn from Judaism, Roman Catholicism, Buddhism and a whole range of other religions.) The rites of the ancient cult of Isis were said to represent a kind of symbolic death and rebirth granting the initiate a future blissful afterlife, helped by Isis.

Many images exist of Isis nursing the infant Horus and are suspiciously reminiscent of the Virgin Mary nursing the infant Jesus. As a result, it is often claimed that the Christian artists took their inspiration from the ancient works.

As I mentioned, my novel, Wrath of the Ancients, features the god Set, who killed Osiris. Where Isis is mostly represented as a wise and perfect example, Set represented everything dark. No wonder then that the sinister archeologist of my story – Dr. Emeryk Quintillus – has chosen to summon him. 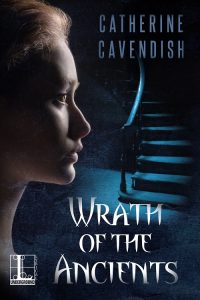 WRATH OF THE ANCIENTS

Eminent archaeologist Dr. Emeryk Quintillus has unearthed the burial chamber of Cleopatra. But this tomb raider’s obsession with the Queen of the Nile has nothing to do with preserving history. Stealing sacred and priceless relics, he murders his expedition crew, and flees—escaping the quake that swallows the site beneath the desert sands . . .

Young widow Adeline Ogilvy has accepted employment at the mansion of Dr. Quintillus, transcribing the late professor’s memoirs. Within the pages of his journals, she discovers the ravings of a madman convinced he possessed the ability to reincarnate Cleopatra. Within the walls of his home, she is assailed by unexplained phenomena: strange sounds, shadowy figures, and apparitions of hieroglyphics.

Something pursued Dr. Quintillus from Egypt. Something dark, something hungry. Something tied to the fate and future of Adeline Ogilvy . . .

You can purchase WRATH OF THE ANCIENTS at:
Amazon
Nook
Apple
Google
Kobo

About The Author:
Following a varied career in sales, advertising and career guidance, Catherine Cavendish is now the full-time author of a number of paranormal, ghostly and Gothic horror novels, novellas and short stories. Cat’s novels include the Nemesis of the Gods trilogy – Wrath of the Ancients, Waking the Ancients and Damned by the Ancients, plus The Devil’s Serenade, The Pendle Curse, Saving Grace Devine and many more. She lives with her long-suffering husband, and a black cat who has never forgotten that her species used to be worshipped in ancient Egypt. She sees no reason why that practice should not continue. Cat and her family divide their time between Liverpool and a 260-year-old haunted apartment in North Wales.