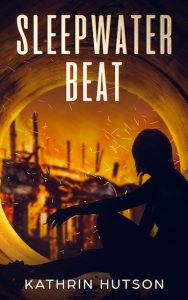 “Words can kill. Hers are deadlier than bullets. Listen.” A blockbuster, cinematic experience from beginning to end. From author Kathrin Hutson

What would a world look like in which words had even more power than the people who wielded them? Leo Tieffler has always had the ability to make people believe anything she says—really believe. This is the driving force of Sleepwater Beat, a fast-paced, near-future dystopian sci-fi novel by Amazon bestselling and local Vermont author Kathrin Hutson.

When the underground organization called Sleepwater finds Leo, she is thrust into a world that may finally help her understand who she is and where she came from. With that lies her only chance to feel, for the first time, like she belongs anywhere. After using her superpower on her girlfriend and her dad’s drug dealer, Leo has spent far too long on the run, navigating the streets and fighting to survive. What she doesn’t anticipate is Sleepwater’s agenda, a brewing war, the government agencies hunting her, and ultimately being used as a more destructive weapon than she’s already become.

Sleepwater Beat, published by Exquisite Darkness Press, delivers Ms. Hutson’s first foray into LGBT science fiction. The series is driven by a unique ability Hutson dubs “the beat,” a refreshing new spin on traditional superpowers rarely seen in science fiction. This lends Sleepwater Beat an exciting and exploratory edge that is sure to appeal to all fans of the genre. Along with its strong-willed female protagonist Leo, Sleepwater Beat’s cast of complex and all-too-human characters fuels an engaging plot laced with an LGBT romance, heart-pounding action scenes, and just enough thrill and mystery to make this a true can’t-put-it-down page-turner.

Discover the risks and the lengths to which Leo will go to survive, all while desperately searching for a place where someone like her—broken and overwhelmingly powerful—can exist as she truly is. Kathrin Hutson takes on science fiction with eloquence, rich and well-crafted prose, and a masterful approach to questioning ethics and all the what ifs, making Sleepwater Beat a truly unique and intriguing read as Book One in the Blue Helix series.

About the Book:
They say the pen is mightier than the sword. In Sleepwater’s world, words are literally more powerful than bullets.

Leo could always make people believe anything she says—really believe. When her chest burns and the words come from her mouth, her targets’ eyes glaze over, they forget their own thoughts, and they’ll do anything she says. It’s what keeps her alive after being on the run and living on the streets for years. But after using it on her girlfriend and her dad’s drug dealer, it’s also what got her here on the streets in the first place.

Then Sleepwater finds her. When Leo discovers there are others out there with similar powers, scattered across the country, she can’t say no to the underground organization. After all, what’s a little sit-down with the only people who may ever understand her? What she doesn’t expect is to be thrust into Sleepwater’s guerrilla war, hunted by government agencies, and used as a weapon. Worse than that, she might be more valuable not for what she can do but for who she was before they found her. 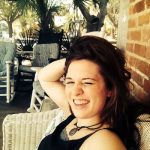 Kathrin Hutson has been writing Fantasy and Sci-Fi since 2000. She can’t get enough of tainted heroes, excruciating circumstances, impossible decisions, and Happy Never After.

In addition to writing dark and enchanting fiction, Kathrin spends the other half of her time as a fiction ghostwriter of almost every genre, as an Independent Editor through her company KLH CreateWorks, and as Fiction Co-Editor for Burlington’s Mud Season Review. She finds just as much joy and enthusiasm in working closely with other fiction authors on their incredible novels as she does in writing her own.

Kathrin lives in Vermont with her husband, their young daughter, and their two dogs, Sadie and Brucewillis, and is constantly on the lookout for other upcoming authors, great new books, and more people with whom to share her love of words.

Kathrin is available for interviews, media appearances, speaking engagements, and/or book review requests – please contact mickey.creativeedge@gmail.com by email or by phone at 403.464.6925.