New Mysteries for May! 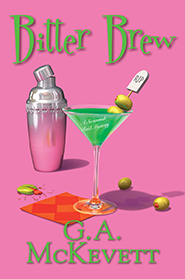 Although P.I. Savannah Reid always has a lot on her plate, she would drop just about anything for a friend in trouble. But when good intentions pull her into a toxic murder case, Savannah’s days as San Carmelita’s most full-figured detective might be running out . . .

Savannah is shaken to the core when coroner Dr. Jennifer Liu appears on her doorstep late one night with a disturbing confession. In a potentially career-ruining move, a remorseful Dr. Liu admits to fudging an autopsy report to keep her friend Brianne’s suicide a secret—fulfilling a final promise made before the terminally ill woman administered a lethal drug cocktail. But after Dr. Liu finds the same unique mixture in a second body, she fears the deaths share a dark connection . . .

Apprehensive about concealing a felony, Savannah and the Moonlight Magnolia Detective Agency launch a discreet investigation into Brianne’s rare condition and the deadly concoction linking the two bodies. As chilling evidence points to an undeniable case of double murder, the agency races to slim down the suspect list and blow the lid off a shifty criminal’s poisonous agenda. Savannah only hopes that, like Dr. Liu, her desire to help a friend won’t put her reputation at risk—or, worse, land her on the next slab . . .

YOU CAN PURCHASE BITTER BREW AT:
Kensington Books 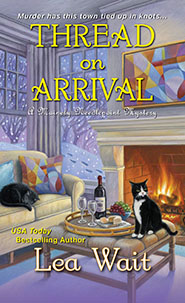 Thread On Arrival: A Mainely Needlepoint Mystery #8 by Lea Wait

In this coastal New England town, folks take care of the needy—but someone is killing without kindness . . .

Ike Hamilton is a part of the Haven Harbor community just like anyone else, though he’s fallen on hard times and has to make do on disability checks and deposit bottles. Most of the locals do what they can to help him out, and needlepointing partners Angie and Sarah are happy to see him at the annual Blessing of the Fleet, honoring all those lost at sea over the centuries.

But when harmless Ike is stabbed, suspicion quickly falls on a troubled teenage boy who’s new in town. Angie’s convinced that young Leo is innocent—but if he didn’t do it, who did? Turns out Ike may have appeared simple-minded, but he knew a few secrets that someone might have murdered him to keep quiet. Angie sets out to trace Ike’s bottle-collecting route to find out what he witnessed—and for this killer, there may be no redemption . . .

YOU CAN PURCHASE THREAD ON ARRIVAL AT:
Kensington Books 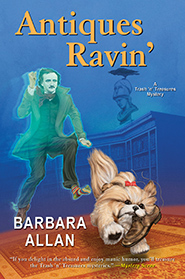 As spring lassos small-town Serenity, Brandy Borne’s crime-bustin’ mama, Vivian, hatches a harebrained scheme to run for county sheriff—ropin’ in her daughter as campaign manager. First stop: a local assisted-living home, the ideal place to round up some voters and some much-needed funds. But shortly after they rope in a valuable donation, a signed photo of an old-timey cowboy actor, a massive explosion sends Brandy to the ER and the donor to the grave. Now the ditzy duo—aided by their clever shih tzu, Sushi—must lay down the law on a deadly renegade . . .

YOU CAN PURCHASE ANTIQUES RAVIN’ AT:
Kensington Books 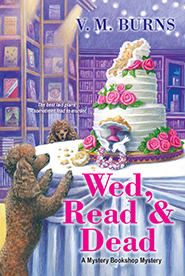 Sam’s mother can’t wait to wed her wealthy beau, Harold Robertson. The big mystery is how they’re going to pull off a lavish wedding in three weeks. Harold’s snobby sister-in-law proposes a solution: engage flamboyant wedding planner Lydia Lighthouse. But their beacon of hope quickly sends everyone into a blind rage, most of all the groom-to-be. So when the maddening micromanager is strangled with her own scarf, it’s a shock, but not a surprise.

It’s a case of art imitating life as Sam pens her next historical mystery set in England between the wars. Lady Daphne Marsh insists on marrying Lord James Browning on Christmas Eve, three weeks hence. But when the fop planning their wedding ends up with a knife in his back, she vows to nab the backstabber before she walks down the aisle.

Meanwhile, when she’s not writing, Sam and her beloved and boisterous Nana Jo rush to shine a light on Lydia’s killer—so her mother’s new husband won’t spend his honeymoon behind bars . . .

YOU CAN PURCHASE WED, READ & DEAD AT:
Kensington Books 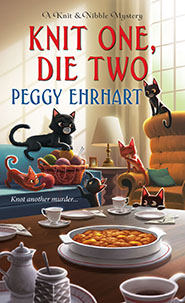 When Arborville, New Jersey’s snooty theater scene is upstaged by a shocking murder, Pamela Paterson and her Knit and Nibble knitting club must act quickly to stop a killer from making an encore performance . . .

Knit and Nibble’s numbers are growing! In addition to a litter of adorable kittens, the knitting club just welcomed their newest member, Caralee Lorimer, who’s learning to knit for her upcoming role in A Tale of Two Cities. According to the amateur actress, the behind-the-scenes drama at the theater is getting downright catty, and Caralee wants a reckoning for Arborville’s pretentious suburbanites. Her claws are out, and just like her character in the play, Caralee is ready to name names. But before she can finish her snitchy stitches, Caralee is killed in a suspicious theater accident. Someone thinks they’ve staged a perfect murder, but Pamela and her Knit and Nibblers are ready to pounce on the real killer . . . before it’s curtains for anyone else!

YOU CAN PURCHASE KNIT ONE, DIE TWO AT:
Kensington Books

Readers Entertainmenthttp://dayagency.com
Previous articleI Am C-3PO
Next articleFrankenstein Gets An Upgrade by Sheila English