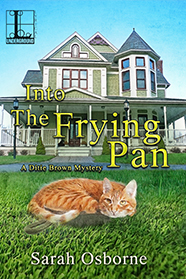 Into The Frying Pan: A Ditie Brown Mystery #2 Sarah Osborne

Mabel Aphrodite Brown has quickly learned that motherhood can sometimes be a real skirmish. But when death visits a Civil War reenactment, it’s murder that’s a battlefield . . .

In the thick of a hot, muggy Atlanta summer, all Ditie Brown wants to do is keep her kids occupied and get them ready for school in the fall. When her ex-boyfriend, Phil Brockton, shows up for a Civil War reenactment, she thinks it might be fun and educational for the kids. Plus, her best friend Lurleen wants to put on the costumes and get in on the action, and Ditie isn’t one to rebel.

But things go south after a cannon misfires, resulting in the death of Phil’s med school rival. Was it an accident or something more sinister? Ditie soon realizes the past rarely stays buried, and her digging reveals longstanding enemies, killer motives, and new jealousy. When another reenactor is “accidentally” shot, the pressure is on for Ditie to solve the murders—or else her friends may be history . . .

You can purchase INTO THE FRYING PAN at:
Kensington Books 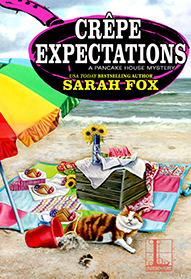 When a murder case from the past heats up again, it’s up to Marley McKinney to sort through a tall stack of suspects in the latest Pancake House Mystery. . .

Although it’s a soggy start to spring in Wildwood Cove, the weather clears up just in time for the town to host an amateur chef competition. Marley McKinney, owner of the Flip Side pancake house, already signed up to volunteer, and chef Ivan Kaminski is one of the judges. But when Marley visits her landscaper boyfriend Brett at the site of the Victorian mansion that’s being restored as the Wildwood Inn, she discovers something else pushing up daisies: human remains.

The skeleton on the riverbank washed out by the early-spring floodwaters belonged to eighteen-year-old Demetra Kozani, who vanished a decade earlier. While the cold case is reopened, Marley must step in when some of the cook-off contestants fall suspiciously ill. Stuck in a syrupy mess of sabotage and blackmail, it falls to Marley to stop a killer from crêping up on another victim. . .

Includes pancake recipes right from The Flip Side menu!

“Readers will cheer this brisk, literate addition to the world of small-town cozies.” —Kirkus Reviews on Wine and Punishment

You can purchase CREPE EXPECTATIONS at:
Kensington Books 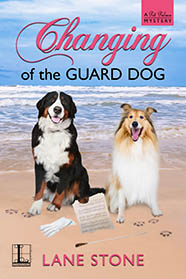 At Buckingham Pet Palace doggy daycare, the (canine) customer is always king—but when a killer strikes, owner Sue Patrick is the queen of crime-solving . . .

An early morning beach jog takes a somber turn when Sue Patrick and Lewes, Delaware’s Chief of Police, John Turner, encounter a gentleman dressed in a tux—and indisputably dead. While John runs to alert police, Sue witnesses an interloper rummaging through the victim’s pockets, right before he’s shot by a second stranger who attacks Sue. Two trusty doggy friends come to her aid, but the shooter escapes.

The well-dressed corpse was Danish conductor Georg Nielsen, darling of the classical music world. Lewes is hosting the world debut of Georg’s new sonata, and the show must go on . . . but there’s major discord amongst the musicians. Lady Anthea, Sue’s aristocratic business partner, joins her in trying to bring the curtain down on a killer. But they’ll need four-legged help to stop a maestro murderer who seems to have orchestrated the perfect crime . . .

You can purchase CHANGING OF THE GUARD DOG at:
Kensington Books 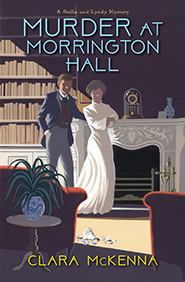 Stella Kendrick is an all-American heiress who can’t be tamed. But when the lively aspiring equine trainer tangles with British aristocracy, she meets her match—and a murderer . . .

Spring, 1905: Free-spirited like the Thoroughbreds she rides across the Kentucky countryside, Stella takes adventure by the reins when she’s asked to attend a mysterious wedding in rural England. But once she arrives at the lush Morrington Hall estate, her cold and ambitious father confesses that he won’t only give away his best racehorses as gifts—he has also arranged to give away his daughter as bride to the Earl of Atherly’s financially strapped son . . .

Stella refuses to be sold off like a prized pony. Yet despite a rough start, there’s something intriguing about her groom-to-be, the roguish Viscount “Lyndy” Lyndhurst. The unlikely pair could actually be on the right track with each other . . . until they find the vicar who was to marry them dead in the library.

With culture clashes mounting between families, a scandalous murder case hangs over Morrington Hall. Now, Stella and Lyndy must go from future spouses to amateur sleuths as they team up to search for the truth—and prevent an unbridled criminal from destroying their new life together right out of the gate . . .

You can purchase MURDER AT MORRINGTON HALL at:
Kensington Books 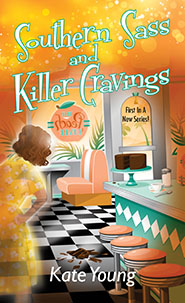 Life has always been sweet on Georgia’s Peach Cove Island, but a case of murder has Marygene Brown down in the pits . . .

For generations, the women of the Brown family on Peach Cove Island have been known for their Southern sass and sweet homemade desserts at their beloved Peach Diner. Since their mother’s passing two years ago, Marygene has been stuck in Atlanta while her sister Jena Lynn has been running the family business. Now Marygene has left her husband and returned to her hometown, where she can almost feel Mama’s presence.

But all is not peachy back home. Marygene has barely tied on an apron when a diner regular drops dead at the counter. When it turns out the old man’s been poisoned, Jena Lynn is led away in handcuffs and the family eatery is closed. Now, to save her sister and the diner, Marygene must find the real killer. With some startling assistance from her Mama’s spirit, Marygene will be serving up a special order of just desserts . . .

You can purchase SOUTHERN SASS AND KILLER CRAVINGS at:
Kensington Books