Frank Bennack’s Leave Something on the Table Coming in October 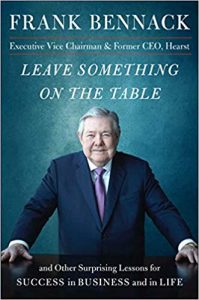 Simon & Schuster announced today that it will publish Leave Something on the Table: And Other Surprising Lessons for Success in Business and in Life by Frank Bennack. Bennack is the executive vice chairman and former CEO of Hearst, an $11.4 billion leading global, diversified media, information and services company with more than 360 businesses around the world. In Leave Something on the Table, which debuts in October 2019, Bennack shares insider anecdotes and hard-won lessons of an American success story, incorporating his encounters with U.S. presidents, industry leaders, top editors, news influencers and broadcasters, among others. The book highlights the core principles he stuck to and the wisdom he gained through one of the most accomplished and illustrious careers in the history of media and business.

A self-starter, Bennack held his first job at 8, hosted his own television show at 17, and brought the energy of an entrepreneurial mindset to a venerable publishing firm. As chief executive of Hearst for more than 28 years beginning in 1979, Bennack helped solidify the company’s reputation as a leader in consumer media with the acquisition of more than two dozen television stations, major newspapers including the Houston Chronicle and the San Francisco Chronicle, and the launch of magazines, including O, The Oprah Magazine and HGTV Magazine. He also led the $1 billion acquisition of over 100 titles, including iconic brands like ELLE and Road & Track.

Under his watch, Hearst marched toward diversification and global expansion with the company’s purchase of healthcare information leader MCG and acquisitions of business media assets including global ratings agency Fitch Group. Just as importantly, he drove Hearst’s expansion into television and cable networking, partnering with ABC, now the Walt Disney Company, to launch the cable networks A&E, HISTORY and Lifetime. One of his greatest achievements was when, in 1990, he negotiated a 20 percent stake in ESPN for $167 million. Market analysts have estimated the value of the network at roughly $30 billion.

“My journey is one built on institutional culture and character—building it, maintaining it, passing it on,” Bennack said. “I firmly believe there is one unchanging North Star. It isn’t what you know, and how hard you work, and how clever you are. It’s not even who you know. It’s how other people know you. It’s who you are. This book is about the importance of values in our work and personal lives—it’s about the value of values.”

“Frank Bennack has one of the most innovative minds in business and is always looking ahead, as exemplified by his leading Hearst’s early acquisition of a stake in ESPN and its construction of New York City’s first green office building,” Simon & Schuster Senior Editor Sean Manning said. “But with this book, he takes a rare and welcome glance backward, sharing the inspiring wisdom he’s gained over the course of his storied career. Bennack transformed a 1950s magazine and newspaper company into the highly successful 132-year-old startup that Hearst is today.”

Bennack served as Hearst’s CEO for more than 28 years. He directed the company through an unprecedented period of growth from when he began his first tenure as CEO in 1979 through June 2013 when he stepped down—increasing revenues 14 times and growing earnings more than 30 times, through investments, acquisitions and start-ups. Bennack is also chairman of the company’s Executive Committee, a director of Hearst and a trustee of The Hearst Family Trust established under the will of William Randolph Hearst. In addition, he sits on a number of corporate committees and the Hearst Foundations Boards, where he has served for more than 25 years. Bennack is currently a director of Ralph Lauren Corporation. He is chairman of Hearst Magazines UK, a wholly owned subsidiary of Hearst. Bennack is also a governor and former chairman of NewYork-Presbyterian Hospital and its Healthcare System, a managing director of the Metropolitan Opera of New York, chairman emeritus of Lincoln Center for the Performing Arts and chairman of The Paley Center for Media (formerly The Museum of Television & Radio).

Readers Entertainmenthttp://dayagency.com
Previous articleThe Power of Song to Unite and Shape Our Nation
Next articleHarlequin’s Romance Includes You Mentorship Initiative