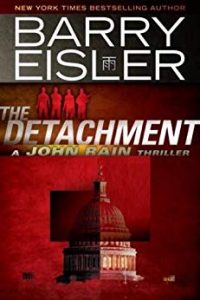 THE DETACHMENT by Barry Eisler

Living a nice restful life in Tokyo, John Rain, is going about his normal activities when he spots two beefy, military looking, guys watching him as he works out at the Kokodan.

Rain has not killed anyone in a long time, but, his trouble radar is still intact as he decides to make sure these dudes are after him, or are legitimate innocent visitors to the Kokodan.

They are after him.

The two guys have been sent to watch Rain by two others: Daniel Larison and Ben Treven (who we, Eisler fans, all know and “love”).

The two military guys want to take Rain, so, being ever so smart……Larison tells them to go right ahead.

They both die trying.

Well…..one thing leads to another and a team is formed by Colonel Hort Horton who Rain has met in years past and who is now the head of the Intelligence Support Activity or ISA.

A coup is being planned and Hort needs Rain to take out three people, but, make their deaths look natural. With Larison, Treven, Rain, and now, Dox the “detachment” takes care of two of the subjects, but, draws the line at the third.

Then they realize they have been played.

All hell breaks loose and four of the worlds most dangerous killers are on the loose plotting……REVENGE.

To see what happens, you will have to read the book.

“The Detachment” is a 5 tequila stressful, extremely complicated, political thrill ride. With the wily deadly Rain (as the leader), the affable deadly Dox, the confused deadly Treven, and the deadly deadly Larison on the same team you never know from page to page who will die…..or who lives (if anyone).