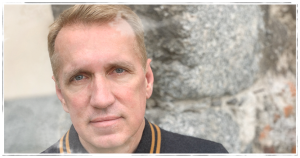 Untold millennia ago, the world ceased its turning. It left one side frozen, locked in eternal darkness; the other a blasted ruin, forever facing the sun. Continents shifted, oceans boiled away, lands sank under miles of ice. To survive, life evolved in strange and unpredictable ways to fill the harsh niches of this new landscape. Even its people were forced to retreat to the only inhabitable region of the globe: to the band of twilight lands trapped between the burning brightness and frozen darkness. Within these lands, tribes and kingdoms struggle against one another, vying for power among the magic, myths and prophecy that grip their lives. But a young girl foretells a new apocalypse approaching, one that will end all life for all time. Her reward is a charge of grave heresy, punishable by death.

As she flees, she gathers an unlikely alliance of outcasts to join her cause to save their world. The journey will take them into lands both burning bright and eternally frozen, to face creatures unimaginable and enemies beyond reason. All the while, hostile forces will hunt them. Armies will wage war around them. To stop the coming apocalypse, it will be up to this group to form a fellowship strong enough to move a planet, to melt the amber that forever traps their world—and set it turning once again.

Of the acquisition, Hinton remarked, “There are few storytellers who can match James Rollins and I couldn’t be more thrilled to bring his gifts to Tor. This is a series that will bring all his talents to bear: page-turning action and adventure and suspense; inventive and deeply informed use of science and history, engrossing characters, masterful plotting, and a lifelong passion for science fiction and fantasy. I’m certain fans old and new will not be able to put these books down.”

Rollins enthused, “From junior high and onward, I grew up reading countless titles produced by Tor. Since its inception, the house has always been at the forefront of introducing new authors and intriguing voices to the world. In fact, I doubt I would be an author today if it wasn’t for the inspiration of those earlier Tor authors. Now, decades later, I couldn’t be more thrilled to have Tor carry the banner of my new series to another generation of readers—to perhaps inspire other young writers out there dreaming of unknown lands and daunting adventures.”

The first novel, The Starless Crown is planned for publication in Summer 2021.

About the author JAMES ROLLINS is the #1 New York Times bestseller of international thrillers, sold to over forty countries. His Sigma series has earned national accolades and has topped charts around the world. He is also a practicing veterinarian, who still spends time underground or underwater as an avid spelunker and diver. He has also been involved in a multitude of philanthropic efforts, both in support of animal welfare issues and to help veterans nationwide. His charitable contributions earned him the distinguished Silver Bullet Award from the International Thriller Writers.

In addition to writing scientific adventures, Rollins has published fantastical works for anthologies edited by George R.R. Martin and R.L. Stine, and it’s a poorly kept secret that he has published two sprawling fantasy series under a pseudonym. In fact, his first published work (Wit’ch Fire) was the start of a five-book epic. And now he returns to those roots for a masterwork that’s been eight years in the making, one he considers the pinnacle of his career, a concept he could only tackle after honing his storytelling skills over the course of two decades of writing. At long last, Rollins debuts a major new series that opens a riven world trapped between fire and ice, merging his fascination with the natural world, his love of adventure, and his knowledge of the wonders found at the evolutionary fringes of scientific exploration. It is a fantasy series unlike any attempted before.

About Tor Books Tor Books, an imprint of Tom Doherty Associates, is a New York-based publisher of bestselling and critically acclaimed fiction in all formats. Founded in 1980, Tor publishes what is arguably the largest and most diverse line of award winning science fiction and fantasy, with its books receiving every major award in the SF and Fantasy field. Tor has been named Best Publisher 30 years in a row in the Locus Poll, the largest consumer poll in SF.