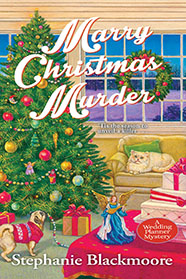 Olivia’s dreaming of a white Christmas—as in a white wedding gown and all the trimmings. But that’s not the only event that’s keeping everyone busy. Olivia’s family are in real estate development, and they’re sponsoring Paws and Poinsettias—a benefit for the Port Quincy animal shelter. Meanwhile, Mallory’s mom wants to use her daughter’s connection to snag a job staging homes for the company . . . and the current stager is not filled with holiday cheer at the news that she might be replaced.

When the endangered employee downs some antifreeze-spiked punch at a party, Mallory has a murder to solve—among other mysteries including a missing cat, a toy-drive heist, and a baby found in a manger thirty years earlier…

You can purchase MARRY CHRISTMAS MURDER at:
Kensington Books 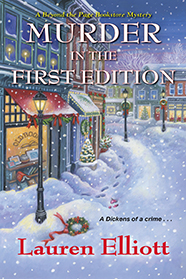 Murder In The First Edition: A Beyond The Page Bookstore Mystery #3 Lauren Elliott

Addie Greyborne is preparing for the holidays at her bookstore in seaside New England—but a winter storm is coming, in more ways than one….

Addie’s getting into the spirit for the upcoming Charity Auction—especially since she’s got an 1843 copy of Charles Dickens’s A Christmas Carol to donate. Her former colleagues at the Boston Public Library have confirmed that its worth runs toward the high five figures, which should help with the new pediatric wing. Her mood darkens, though, when a visitor from the past appears—Jonathan Hemingway, the father of her late fiancé. His presence stirs up sad memories for Addie, but also has her fuming when Jonathan, true to his womanizing ways, runs off for a lunchtime liaison with Teresa Lang, who’s in charge of the auction.

Soon after, Addie heads to Teresa’s office at the hospital—and finds the poor woman’s dead body. What she doesn’t find is her valuable first edition. What sort of Scrooge would steal from sick children and commit murder in the process? As a Nor’easter bears down and a mystery emerges about Jonathan’s past, Addie must find out if she can appraise people’s motives and characters as well as she can appraise rare books…

You can purchase MURDER IN THE FIRST EDITION at:
Kensington Books 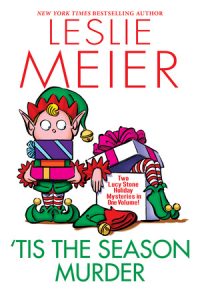 Christmas has come to Tinker’s Cove, Maine, and sleuthing skills are at the top of Lucy’s Stone’s wish list in these two beloved mysteries—now collected in one festive volume for the very first time!…

After the annual parade of Christmas presents in Tinker’s Cove has ended, Lucy Stone and her daughter are ready to ring in the new year in style. Elizabeth has won mother/daughter winter makeovers in Manhattan from Jolie magazine! But the all-expenses-paid trip is bound to have some hidden costs—and one of them is murder. Soon it will be up to Lucy to dress down a killer before the ball drops in Times Square…

Lucy Stone is excited about acting in the town’s production of A Christmas Carol. But a real-life Scrooge has everyone feeling frosty. While Tinker’s Cove has fallen on hard times, Downeast Mortgage owners Jake Marlowe and Ben Scribner are raking in profits from misfortune. So when Marlowe is murdered, the suspects are many. But Scribner claims Marlowe’s ghost has come to warn him of his own impending demise—and he’s soon receiving death threats. Now Lucy will have to solve the case faster than she can say “Bah! Humbug!” …

You can purchase ‘TIS THE SEASON MURDER at:
Kensington Books 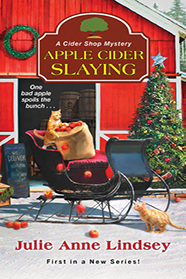 Apples are at the core of the family business run by Winona Mae Montgomery and her Granny Smythe. But this year’s crop is unseasonably ripe with murder . . .

Blossom Valley, West Virginia, is home to Smythe Orchards, Winnie and her Granny’s beloved twenty-five-acre farm and family business. But any way you slice it, it’s struggling. That’s why they’re trying to drum up business with the “First Annual Christmas at the Orchard,” a good old-fashioned holiday festival with enough delicious draw to satisfy apple-picking locals and cider-loving tourists alike—until the whole endeavor takes a sour turn when the body of Nadine Cooper, Granny’s long-time, grudge-holding nemesis, is found lodged in the apple press. Now, with Granny the number one suspect, Winnie is hard-pressed to prove her innocence before the real killer delivers another murder…

“The characters are delightful . . . Plenty of action and suspense.” —RT Book Reviews on Murder in Real Time

You can purchase APPLE CIDER SLAYING at:
Kensington Books 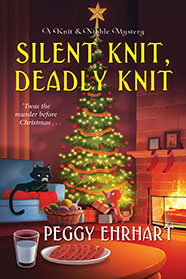 When murder silences the Christmas cheer in charming Arborville, New Jersey, Pamela and her Knit and Nibble pals must unravel the most bone-chilling mystery this side of the North Pole . . .

Pamela has been in merry spirits since her artsy daughter Penny returned home from college for the holidays. But their mother-daughter bonding time gets cut short when a terrified Penny stumbles upon the dumped body of Millicent Farthingale, a wealthy craft shop owner who was popular for all the wrong reasons. From a scheming business partner to a seedy husband several years her junior, Millicent attracted scammers so in love with her assets, they’d toss her down a chimney to get their paws on them. Now, with only a hand-knit red scarf connecting the killer to the crime, Pamela and the Knit and Nibblers could use some extra creativity as they find out who’s really naughty or nice in Arborville—because going up against a looming culprit is DIY or die!

You can purchase SILENT KNIT, DEADLY KNIT at:
Kensington Books